Setting Up a Local group

Max Gattie from the Manchester Stammering Support Group explains how he set it up and gives tips for starting a group in your area.

Being around others who stammer is an unforgettable, if initially awkward, rite of passage. As in a hall of mirrors, manifestations of oneself are reflected back multifold. Several stages of the stammering odyssey are seen simultaneously. Experiences you’d viewed as unique turn out to be not so extraordinary after all. As these commonalities crystallise, you gain insights which would have been impossible to obtain otherwise.

The Manchester Stammering Support Group meets every fortnight and it's going strong. But it wasn’t always this way. Seven years ago, there was no group at all in Manchester.

Starting a group may be easier with NHS help

In 2007, after a series of one-to-one therapy sessions at Manchester Royal Infirmary, I’d reached the stabilisation phase of speech therapy. My therapist, suggested I attend a support group. I was keen to participate but she only had contact details for one group member, who had moved out of the area. Nothing was running. We would have to start anew. 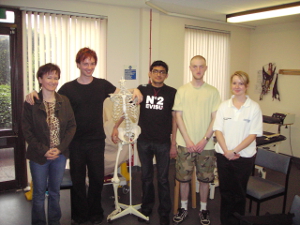 Recruiting from her client list, we set up a group at the hospital. Initial meetings were held monthly, with four or five attendees. We continued in this way for about a year, shuttling between whatever rooms were available. After a few memorable sessions amidst learning skeletons and saline drips, we decided to move away from the hospital environment.

This took us as far as a pub over the road. Soon after, I moved the group again, to a bar near my flat. This might sound selfish, but at the time I was the only regular attendee and thought I might as well make it easy on myself. It helped that I lived next to a major transport hub in the city centre, easy to get to from any part of Manchester. The geographical advantage was, in my opinion, essential in enabling the group to grow.

Meetings continued like this for a couple of years and others started attending regularly. Growing the group beyond five or six was still difficult, though. I quickly found myself making friends, whom I’ll keep for the rest of my life.

Location and management structure are important

At around this point, one of the regulars suggested we move the group, after hearing about a social welfare project that could provide us with a meeting room and minimal funding. A drawback was that we’d be on the outskirts of the city, at least two bus journeys away for most members. It was an attractive opportunity, though. We’d had difficulty finding a private room in the city centre, and had ended up in quiet corners of pubs. This is far from ideal. It can be off-putting for first-time visitors who are self-conscious about stammering. It also precludes many activities, such as guided relaxation or prepared speeches, which would otherwise have been worthwhile. With these limits on meeting structure, it was all too easy for sessions to end up as a talking shop, covering the same old ground every time.

Additionally, the organisation was too loose. I was sending out reminder emails for each meeting, but after several years was keen to step away from the day-to-day running. I didn’t have time to work out a detailed programme for each meeting so I was enthusiastic about shaking up proceedings and moving to a more formal setting. 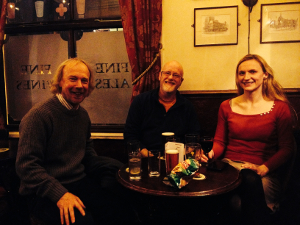 Before going on, it’s worth mentioning that I was concurrently gaining a lot of experience with group leadership elsewhere. I’d acted as club president, and then area governor, for the local Toastmasters public speaking club. As such, I had a good insight into the workings of professionally-run groups. I also knew how difficult it was to find free rooms in the city centre. This wasn’t a problem for Toastmasters, which could rely on 20 attendees at each meeting, and a member list of 30 who paid fees twice yearly. But the stammering group was nowhere near this size, and charging for attendance was unfeasible.

So, we moved to the new venue. The member who had suggested this insisted on a rigid hierarchy, with himself in command. This came as a surprise to long-time members, one of whom walked out early on after being chagrined for lack of attention in a secretarial role. Attendance dropped, although it was hard to tell if this was due to the location, or the new structure. After a few more meetings, the member who had initiated the move dissolved the new group without consultation. This was our biggest test yet. No meeting room, a scattered member base, and nothing scheduled.

Try to let the members run their own group

Fortunately, I was able to resuscitate the group. I had some help, since the member who’d walked out supported a move back to the city centre. With the better catchment in this location, we expected to gain visitors as before, and pull back some of our former members. In particular, by locating the group near the Oxford Road student corridor we could practically guarantee one or two new visitors every week.

Rather than meeting in a public space, we redoubled our efforts to find a private room. As mentioned, this was difficult without paying. However, the Lass O’Gowrie pub provided us with a semi-private space, in return for which we purchased food and added to their bar takings. If they had no other bookings, they’d even let us use their public performance space, which had a stage area and overhead projector. 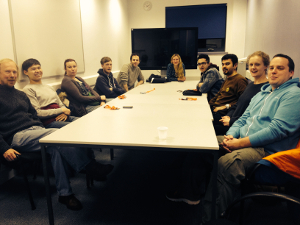 Other changes were to run the group via consensus decision-making; to abolish the role of group leader; and have a different member taking the lead for each meeting. This sounds unworkable but turned out to be a very good fit. It helps to keep meetings fresh, and spreads out administrative duties. The facilitator also puts together the programme and sends out email reminders. A further advantage is that it empowers group members, some of whom have had little experience with leadership duties.

We gained members rapidly, and they attended more frequently. One of them has recently negotiated a meeting room for us at The Manchester College, which has several advantages over the pub setting, not least of which are that we can count on a private space and presentation facilities for every session. For me, it’s a pleasure to take a back seat from the day-to-day running of the group, and to be able to turn up and enjoy meetings in the same way as any other participant.

My suggestions for starting a group

From the Spring 2014 edition of our old magazine 'Speaking Out'.

the stamma guide to starting a group

Download our guide to starting up your own local group by clicking the attachment at the top of the page.

Join one of the many groups or start your own, locally, online or within your workplace.

Sana Arshad talks about the effect her stammer had on her wellbeing, and how help from therapy and a local group has helped her to embrace it. "You are not alone."