Stammering and the power of theatre

Can theatre change public attitudes to people who stammer? That's what Catherine Woolley set out to explore with Unspoken, which was part play, part research study.

In September 2018 I began a masters at UCL to look at whether theatre can change people's attitudes and behaviours towards stammering. Since then, the world around us has changed dramatically, and it seems strange to think when I hand in my dissertation this October, the theatres of London's West End will be sitting in silence thanks to Covid-19. While it may be a long time before we return to the life I remember when I started the course, I've seen small steps that make me think that theatre will be back again somehow.

With the support of several local grants, our production of the play Unspoken opened in Oxford on 2019's International Stammering Awareness Day. Written by Neil Rathmell in collaboration with Dr. Trudy Stewart, the play explored the life of Alex, a person who stammers, on the night he wants to propose to his girlfriend. The play is a surreal one, jumping back through Alex's memories as he thinks about how his stammer has had an impact throughout his life. As he delved through his memories, we found that Alex's story is less about fighting against his stammer but his journey to accept it as part of his identity.

Alex's story is less about fighting against his stammer but his journey to accept it as part of his identity.

But Unspoken wasn't just a show; it also provided data for my research project. Before the play started we invited the audience, who didn't stammer, to fill out a five-minute questionnaire to get an understanding of their thoughts and attitudes about stammering.

In the end, 197 people agreed to take part and they completed the questionnaire before the play started, and again after it had finished. Just under half (84 people) also completed a third questionnaire three months later. As you can possibly imagine, transcribing all that data into a set of spreadsheets was a challenging task, and I've learnt a lot about statistics in the process as well as how to use all sorts of analysis software!

98% of the people taking part in the study reported that the performance was 'good' or 'very good' and they often felt connected to the characters in the performance, a testament to the hard work of our actors.

98% also felt that the show was effective at communicating what it was like to be a person who stammers. This was something important to us throughout the show, and the actors had sessions with specialist speech and language therapists as well as people who stammer to learn more about what stammering is really like.

After seeing Unspoken, people reported that they had conversations about stammering with their friends and family. They also felt more confident in talking about what it was like to be someone who stammered.

On average, 43% of people rated their attitude towards people who stammer higher than before the show. 70% also reported that they felt they knew 'more than average' or 'significantly more than average' about stammering. These changes were also found at the follow up three months later. People connected with the characters, saying 'I found the idea of the sense of extreme isolation stammering can bring very emotional'.

One of the best things about theatre is that it can spark discussion and after seeing Unspoken, people reported that they had conversations about stammering with their friends and family. They also felt more confident in talking about what it was like to be someone who stammered. After the show, 22 people identified how their responses and reactions had changed towards people who stammer. They were more confident listening to stammered speech and using strategies such as being more patient and giving them time to talk.

While using theatre as a way of helping people who stammer is challenging at the moment, this project suggests that it might be able to change people's views for the better. Over the past 10 years, the number of positive portrayals of stammering on stage and screen has increased significantly, such as in Stutterer (2015), Once Upon a Time in Hollywood (2019), Star Wars: The Last Jedi (2019) and (of course), The King's Speech (2010). Hopefully, this is only going to carry on increasing over the next 10 years, and these will continue to challenge and change people's attitudes for the better. Watch this space…

Want to learn more about stammering in theatre and film? I recommend these articles and websites to get you started:

You can read more about the story behind Unspoken in our Q&A with Catherine. 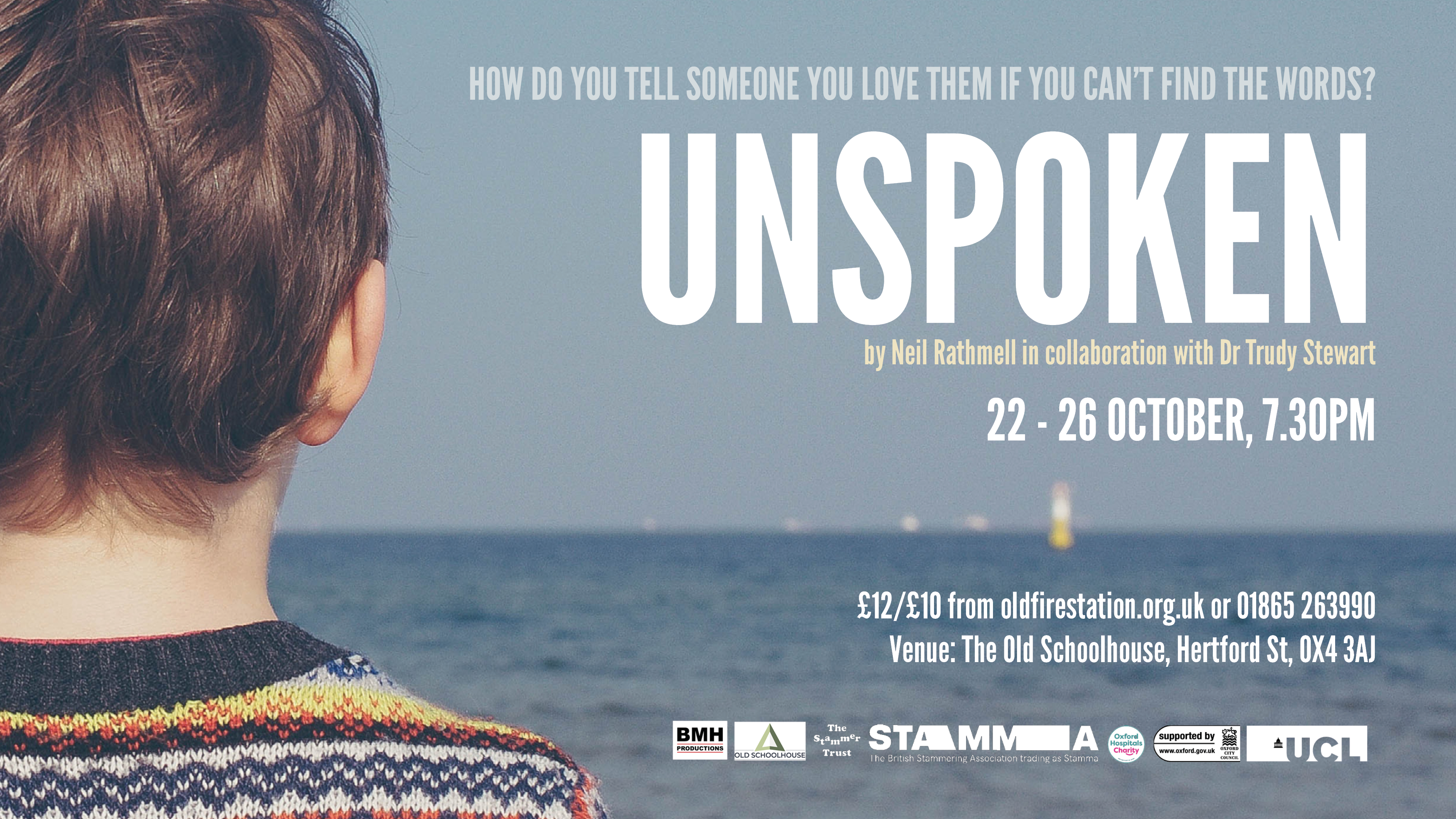 Unspoken is a play showing in Oxford later this October, combining theatre with a research project on stammering. We spoke to its producer to find out more.

Playwright James Corley talks about tapping into his own experiences for his play about not hiding, sharing and connecting.

An interactive art project giving a voice to those who stammer.