Creating the dysfluent heroes I needed as a kid

Feelings of alienation and disconnect from the world made Jo Murphy turn to fiction to find relatable characters. Finding none, Jo set about turning a passion for storytelling into creating a world, through their free online comic strip 'Coursing Constellations', where they could find acceptance, a sense of identity and a way to represent stammering.

Ever since I was a kid, I’ve always felt there was a barrier preventing me from entering the real world. Sure, I was there; I was visible, yet there was always an essence of disconnect surrounding me. My presence in the world felt like my voice sometimes: looming, fractured, never able to truly express myself.

When I was younger I was in a TV documentary about stammering, but not even that eased my isolation. ‘Help Me To Speak’ kind of romanticised my experience, to an extent. My struggle became an object for the world to behold, but who was really watching these things? A few people recognised me, but nothing substantial. This only helped me realise that this was never going to normalise anything. It unintentionally perpetuated the reality that kept me chained behind that line. They only felt sorry for me.

I’ve always existed in this narrative where the only way to progress was to get better. It was always about improvement, nothing concerning coping and acceptance. I would turn on the TV and there would be a joke. I’d struggle to get a word out to a stranger, and yet another joke. Even in the documentary it was all about how people would perceive me. How would I get a boyfriend? How would I get a job? Speech therapy?

These narratives aren’t told because these aren’t the stories people care about.

When people tried to comfort me, it was only to feed me stories about which celebrities had overcome their stammer. They would reassure me they couldn't tell it was there. But then why did it still burn my throat every time I spoke? Why did my face twist and my hands tap to a never-ending beat to maintain the rhythm of fluency?

When it comes to those us who can’t mask our stammer still finding success, there’s nothing. These narratives aren’t told because these aren’t the stories people care about. They’re still sidelined, they’re still different, they don’t fit this ableist notion that disabilities should be closeted until they can be used to manipulate for pity points. That’s why these types of documentaries continue to be made today, as if repeating the message will finally make people realise that we are equal and deserve to be listened to.

Discovering I was bisexual carried an even further blow. It was hard enough finding a straight person who stammered, let alone somebody that was queer.

I was alone, and abandoned.

As someone who always loved storytelling, I turned to fictional worlds to accept me with open arms, but alas, finding a character like myself was futile. I began to wonder if other stammerers felt the same way.

Then, it came to me: maybe I can help them see that being behind the line isn’t as bad as we might have thought. I could even lead fluent people to join us too. But how? Stories. Stories normalise things. While this is what ‘Help Me To Speak’ was trying to achieve, that was non-fiction. Not everyone is going to engage with something like that. Fiction, on the other hand, we all love.

I’ve been writing stories for as long as I can remember, yet had never made the connection until that moment that this is who I am. This is my voice. I have the power to be fluent in my writing, but that’s not uncommon. What is uncommon is my ability to be dysfluent with it. Through combining my words with art I can create a unique way of representing my stammer, using the lens of a story which is more than that. I want people to come for the plot, but leave with a better understanding of something they probably hadn’t even thought of prior to that. 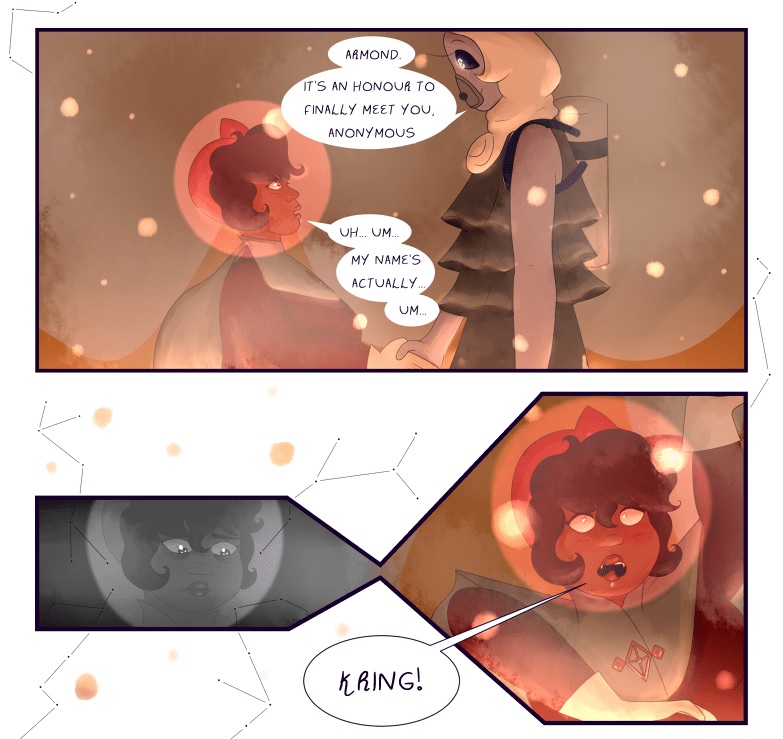 That was the moment I created Coursing Constellations. It’s a online sci-fi drama comic on the free website Webtoon, with new instalments being added regularly. Coursing Constellations is a story of finding identity in a world you're convinced doesn't want you. The plot focuses around our protagonist Kring (see the picture above), tracking the stars to find Earth after humans abandoned it many years ago. But they're really trying to find a place where they belong.

Through combining my words with art I can create a unique way of representing my stammer, using the lens of a story which is more than that.

On their way, Kring ends up meeting (and falling in love with) their best friend's sister, Beatrice, who has more secrets than she cares to admit. These fictional problems she and the rest of the cast face mirror the real ones Kring faces.

The main image above is intended to be a visual representation of leading people over the line that I mentioned above (the line is represented by the stars), and I decided to use Kring to represent how I want to use their character arc to try and achieve that.

To me, it seems that people find it a lot easier to feel sympathy for fictional ailments, such as having a child in a world full of superheroes born without superpowers. I wanted to explore how this stigma around disability in general affects us as people, showing the sides of stammering people don't tend to realise, such as the facial expressions and involuntary body movements. Beatrice also has a love of language and wordplay, further enforcing the central theme of communication, showing that all forms of voice are beautiful. Of course, there's also jokes. Stammering can be funny, but only if you're laughing with, not at, us.

Kring’s voice would not be laughed at, mocked, or cured. It will be theirs and they will thrive with it. It will be a tool to teach, but also one that doesn’t define them.

I wanted to explore how this stigma around disability in general affects us as people, showing the sides of stammering people don't tend to realise.

I was never able to carry on with any of my stories before because I always thought something was missing. Thanks to them, I worked it out. I’m going to give myself, the world, the dysfluent heroes I needed as a kid who used to believe people wouldn’t want to read stories about us. But I’m going to make them.

We deserve more than documentaries and autobiographies. We don’t just have to live normal lives. We don’t have to be shy. We crave adventure. We fall in love. We’re queer. We sometimes even go on silly adventures to find Earth and end up in way more trouble than we anticipated. We are more than our voices.

Representation matters, and it’s time we created our own.

You can enter and subscribe to Jo’s world of Coursing Constellations at Webtoon's website: https://www.webtoons.com/en/challenge/coursing-constellations/list?title_no=375131
It’s all free and there are new instalments every Monday and Friday.