Joe Biden: A President With a Stammer

When Biden made a point of his own stammer when talking to a young Brayden Harrington, people across the world cheered. This was a potential president talking about a condition often seen as shameful, something to hide, on news channels around the world.

Biden's win shows clearly that stammering has nothing to do with mental capacity.

The commentary around Biden often touches upon his stammer as a failing. Stammering isn't a failing or a weakness, it is a condition which makes it hard to talk fluently. So rather than talking up his brilliant achievement of sounding fluent whilst fighting a historic election, his stammer is talked down. People will be celebrating his win across the world because, like him, they stammer. His win shows clearly that stammering has nothing to do with mental capacity, although fortitude in the face of decades of ignorance and stigma may well play a part in his character.

For the fluent world such an achievement is almost invisible; he is rarely heard to stammer, the condition is forgivable, easily forgettable. There will be few headlines about someone who stammers hitting the national press, unless it is a negative story. And that's the point — if he were blind, say, it would be remarked upon: the first blind, disabled president. But stammering is passed by here because of that unspoken embarrassment, because he doesn't stammer that much and so why make a point of it, because it is sad that he had a stammer but that has all passed. And that attitude tells you all you need to know about where stammering sits in our culture. Disowned, apart from by this President Elect.

Now, more than ever, we need to challenge the assumption of weakness and overcoming. We need to persuade people to choose the right words when talking about Biden's stammer.

But this story will not go away. Any stammering will continue to be remarked upon. Before the eyes of the world Biden will meet presidents, prime ministers and princes, and his every word watched out for. Any stammer, mix of words, will be seized upon. Now, more than ever, we need to challenge the assumption of weakness and overcoming. We need to persuade people to choose the right words when talking about Biden's stammer. 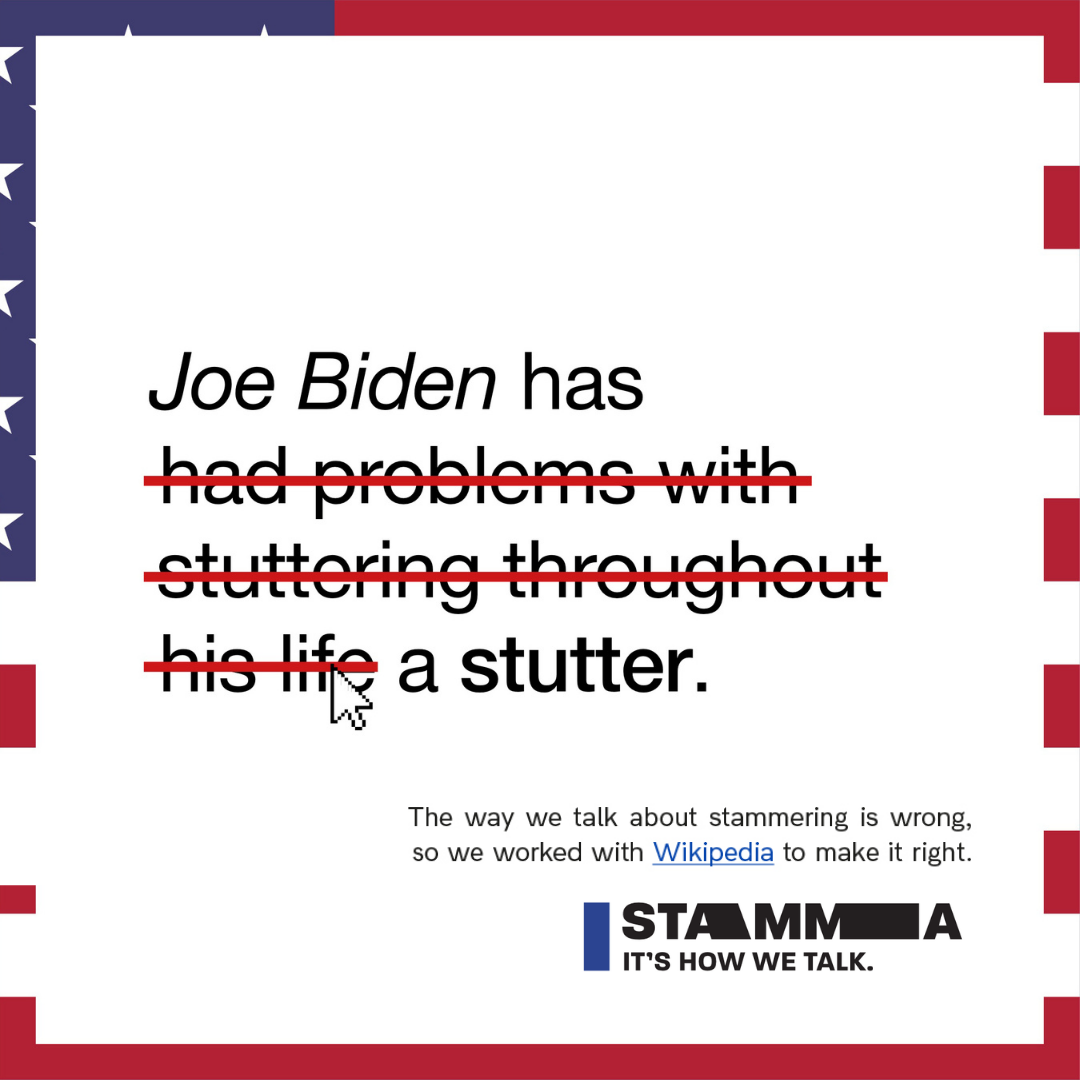 In our Find The Right Words campaign, we highlighted the negative words used to describe stammering on Wikipedia, and produced Guidelines for the media when talking about stammering. We're going to need these in the days, months and years to come.

Joe Biden has been able to manage his stammer so that his invisible, daily fight to get words out is rarely heard or seen. Those whose stammer weaves itself through their every conversation may wish that Biden stammered more; may wish that people understand that it isn't always possible to manage a stammer in this way. But there is time to educate the public. We have four years.

Read more about what STAMMA members think of Joe Biden becoming President in these articles for our Your Voice section:

'Biden's win is a victory for stammering', by Michelle

'We can become leaders', by John

'The impact of Joe Biden', by Adam

'Cometh the hour, cometh the person who stammers', by Alan

Watch Joe Biden discuss stammering with Emily Blunt in this video from the American Institute of Stuttering:

Actress Emily Blunt and former US Vice-President took part in a video call to discuss stammering for the American Institute for Stuttering's annual gala. Watch it here.

Introducing our new campaign aiming to change the language and perception of stammering.

Alan gives us his thoughts on Joe Biden, a person who stammers (PWS), becoming US President Elect, and looks at how he achieved it.

Phillip argues that for society's attitudes to change, we need to educate people and make them look at their language and reactions to those who stammer.

When Pearl chose to write about stammering to get into her first choice university, little did she know that she would end up connecting with part of her identity she’d never felt before.

As our campaign about changing negative language around stammering draws to a close, Patrick Campbell argues for building upon it and introducing new language, to change public attitudes and perceptions.