Supporting Sam and watching him shine

When Victoria Wiggins' son Sam started stammering when he was 3 she felt worried, guilty and helpless. But with the help of speech and language therapy, she learnt how to support Sam and make him see that there's nothing in life he can't do.

I would like to share my feelings, thoughts and experiences of raising an amazingly confident boy with a stammer.

Our journey started when Sam was about 3 years old. Out of the blue he developed a stammer. At this point I didn't think too much about it and thought it may just be a developmental phase. So we didn't draw attention to it.

As a mother, a million thoughts ran through my head. I just didn't know how best to help him and had many questions that I needed to ask.

Over time his stammer became more noticeable and Sam started to become more aware of it. He began changing words that he found difficult such as 'what' to 'how', and this seemed to help ease his frustration for a while.

As time went on, Sam's stammer became more tricky for him and he had started to become frustrated; he would hold his breath and try to squeeze the words out or shout them. I realised then that we may need a little professional help to guide Sam through it.

My own thoughts and feelings

As a mother, a million thoughts ran through my head: will he have a stammer forever? Will he get bullied in school? Will he make friends? How do I help him? I had many feelings too, including frustration, guilt and helplessness. I just didn't know how best to help him and had many questions that I needed to ask, like do I finish his sentences for him to make it easier? Do I look him in the eyes? Do I ignore the stammer completely or draw attention to it and talk to Sam about it? Had I caused the stammer?

We were referred to the speech and language therapy unit in Wrexham and the appointment couldn't come quick enough. I remember meeting Sam's therapist Lisa for the first time; she walked towards us with a big smile that instantly made us feel at ease. She would always make Sam feel important and on the way to the therapy room would ask how he was and if he had had a good week. I always remember how warm and welcoming Lisa had been; her smile made us feel that everything was going to be OK. 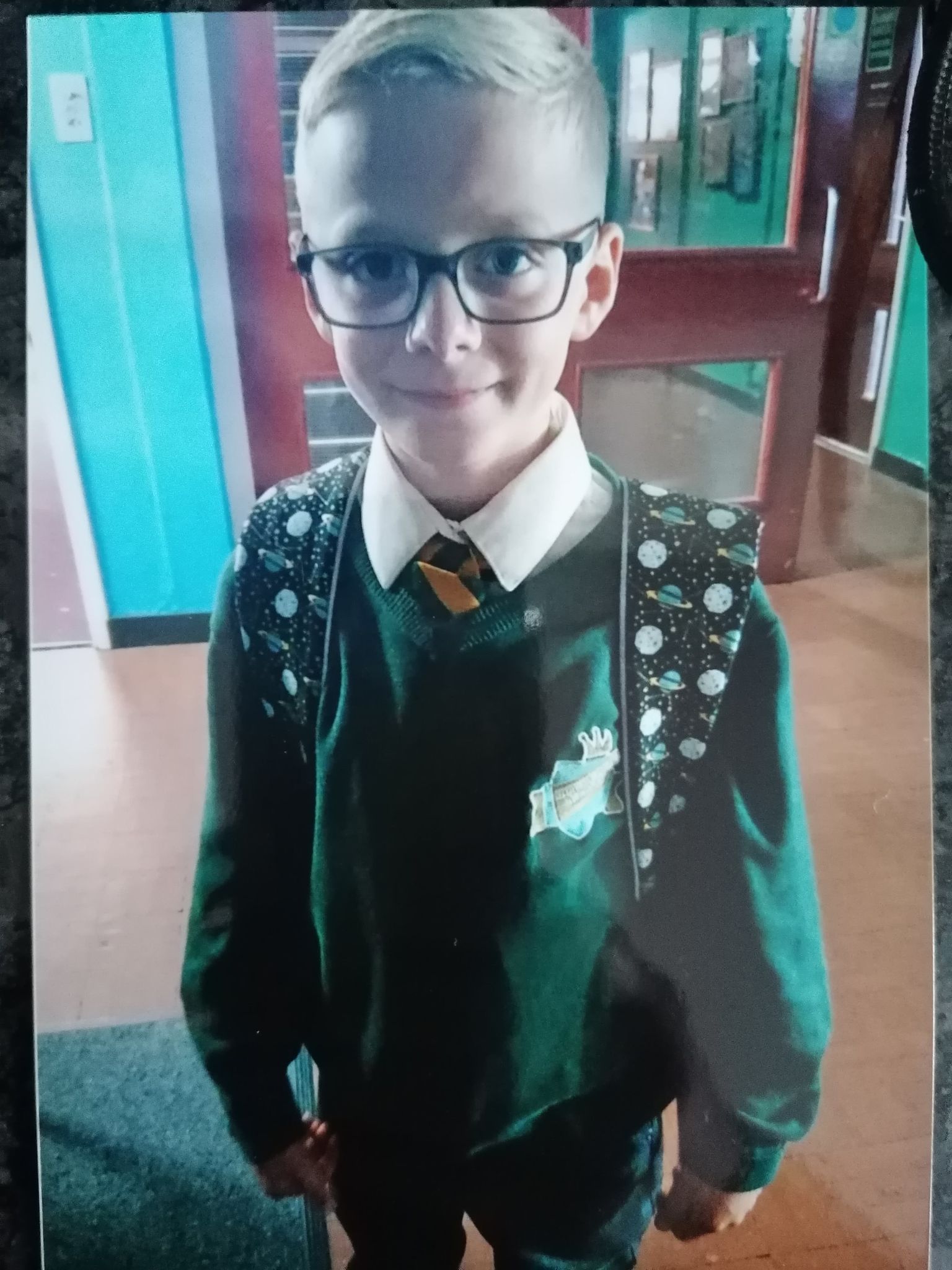 I learnt many lessons, skills and strategies during Sam's speech therapy sessions with Lisa. I can honestly say that the support that Sam and I received in his early years paved the way for the very confident and outgoing boy we have today.

Our house is a very busy and fast environment, as Sam's older sister Abigail has autism and ADHD. Through therapy we learnt that some children just need a little extra time and take a little longer to process information and speak. This was very hard in our house as Abigail found it difficult to take turns or let Sam speak for himself. We worked hard and practised taking turns at talking and allowing Sam the time to speak without feeling rushed or interrupted.

I had thought by finishing Sam's sentences I was helping him. However, I was very wrong. The best way to help was to get down to Sam's level, look him in the eyes and smile. I placed my hand on his shoulder or arm to let him know I was listening and he had my full attention. Sam found this very comforting and he was able to speak with more ease.

The best way to help was to get down to Sam's level, look him in the eyes and smile. I placed my hand on his shoulder or arm to let him know I was listening and he had my full attention.

The most important lesson I learnt in speech therapy was to slow down my own speech. Both myself and Sam's sister spoke very quickly and rushed around at 100 miles an hour. This does not suit all children and Sam was a very sensitive boy. So when I spoke to him I slowed my speaking rate to match his and showed him that he had my attention and could take his time.

Sam attended speech therapy on and off for about 3 or 4 years. His stammer seemed to come in waves — sometimes he was fluent and other times he found it very difficult. For some reason, we don't know why, he seems to find the time around Christmas and New Year the most difficult. With this in mind, we try to prepare and check-in with Sam to help any way we can.

Sam is now 10 and he still has a stammer. It is unlikely that he will stop and he will stammer into his adult life. We try our best to be positive and celebrate our differences; this is who Sam is and that is OK. It's OK to be different. The world would be a boring place if everyone was the same. Sam still attends speech therapy on and off and we have moved away from  Wrexham. He now has another amazing therapist called Alison, who has taught us some more very helpful strategies. For instance, instead of 'bumping' at the beginning of a sentence or a word, Sam learnt to elongate the sound and slide into the word. He still uses this technique and finds it very helpful.

School can be a challenge for children with a stammer. We found that if children understand stammering then they are less likely to be unkind and actually more likely to be supportive of Sam. During his speech therapy sessions, he created a PowerPoint presentation with Alison, which they presented to his new class each year. In the early days, Alison would come into school and help Sam but now he is confident enough to present this himself.

His presentation explains what a stammer is, which celebrities stammer, how to help someone who stammers and what not to do. Sam has found that by educating other children they understand and are very helpful. Some children have never heard anyone with a stammer before.

Sam wants to let other children know that yes, having a stammer is frustrating at times. Yes, it can be hard and we've had tears along the way, but being YOU is the best thing you can be.

Although we had discussed with Sam that there are other people who stammer, he had never met another child with a stammer. When Alison arranged for a group of parents and children to meet up for a group session, Sam's face lit up when he realised he wasn't the only one. For Sam, hearing someone else with a stammer made him feel more confident and he realised he wasn't alone.

Sam has grown from strength to strength. He is a very confident boy and he doesn't let his stammer stop him from doing anything he wants to do. Over the years Sam has enjoyed modelling and acting; he has appeared in supermarket magazines, billboards in 10,000 stores and online. He has filmed with Michelle Keegan for the Sky 1 show Brassic, he's been a supporting artist in a series with Sheridan Smith, appeared in a children's series on CBBC and been the main character in a British Red Cross video.

Sam wants to let other children know that yes, having a stammer is frustrating at times. Yes, it can be hard and we've had tears along the way, but being YOU is the best thing you can be. Be happy being you and rock your stammer!

Sam has found this year particularly difficult with his stammer. We decided to sit down and talk about how he was feeling and put it into words. Together we came up with a poem that we hoped would help other children with a stammer and to educate people on how to support someone who stammers.

I HAVE A STAMMER
By Sam and Victoria Wiggins

Be happy being you
And that is the key
I have a stammer
It's what makes me, Me

Sam's poem has been a smash hit! Read about how it attracted attention from UK media and from abroad here.

We recently posted a poem written by Sam, aged 10, and his mum Victoria, and it's caused something of an international sensation.

Dori Holte shares her regrets about making fluency the goal when her son started stammering, and describes what she would have done differently.