The story behind the comic

Daniele Rossi from Canada tells the true story from childhood that inspired one of his Franky Banky comic strips. Things have changed since then, he explains… 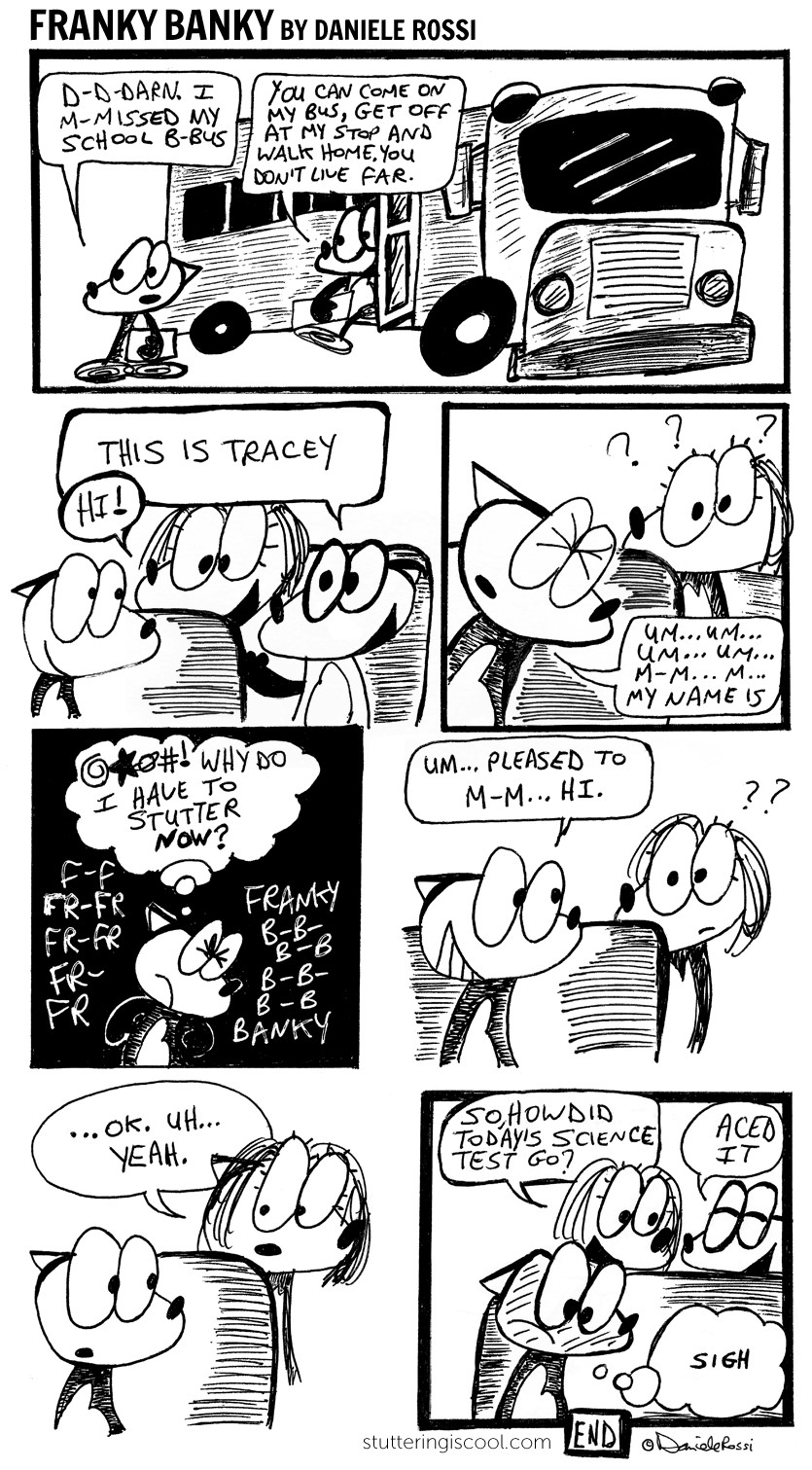 This situation really did happen to me. It was the autumn of 1988 and my family moved to a neighbouring city, resulting in me having to go to a new high school. While I didn’t see that as a problem, since I was only in the second year, it did mean I had to make new friends. However, I was in a different place with my stuttering at the time.

It was the 1980s, long before the internet came into our lives, a time when it was difficult to meet others who stuttered in your immediate geographical area. In other words, I was the only one I knew who stuttered and through the negative feedback I received as a kid — the teasing, funny looks and being mimicked — I learned to believe that stuttering was bad, shameful and my fault. Like all teenagers, I wanted to fit in and I wanted to be cool.

I tried to hide my stuttering and pass myself off as fluent as much as I could. Even with speech therapy, I didn’t dare speak up in class. It was hard for me to make friends and I avoided many social situations. I became known as the quiet one, even though inside I was an extrovert eager to tell jokes, talk about shared interests and meet girls.

The comic I drew to accompany this story is a great example of how much my learned negative belief of stuttering shut me up back then.

The girl on the bus

I really did miss my bus home that day so I sneaked onto my friend’s bus. On the plus side, it was an opportunity to meet my friend’s friends, including a pretty girl with red hair and a cool name. We were having a pretty good conversation when I realised I still hadn’t introduced myself.

"Anyway… um… um… my nay... my nay…", I said while blinking my eyes and moving my head – which was my body’s automatic response when trying to push my words out – "...my nay… my… um… yh… anyway, my nay…. my nay… my nay… my name is Dan," (the easier-for-me-to-say shortened version of my name before my usual long pause of silently blocking on the ‘N’ and a second time on the ‘L’ took place).

The comic is a great example of how much my learned negative belief of stuttering shut me up back then.

With a confused look on her face that read "that was really weird", she replied with a slow "Um... OK." I could tell she didn’t know what to do. If only I knew then what I know now – just tell her you stutter. It’s OK! In fact, you’ll be even cooler if you tell her with a joke about it!

She then turned to my friend and started a new conversation. I wanted to die right then and there in my seat. What didn’t help was when my friend had the brilliant idea to tell me later that the girl told him I was "a little weird". Thanks for letting me know. That stuck with me for the rest of my high school years and then some.

Even though I had met and chatted with the red haired girl a few times after that, I still believed that stuttering was ‘bad’ and shameful. I believed I was inferior. Saying my name and talking to new people became more challenging as my fear of stuttering and the fear of giving off a weirdo impression grew firmly wired into my brain. Not a good feeling.

Thankfully, later on in life, with the advent of the internet and learning that stuttering is in fact OK and an advantage, I have a positive and healthier perspective towards my stuttering. I’ve found that by simply telling people that I stutter, speaking situations were more pleasant than trying to switch words or trick people into saying words for me and then imagine what the heck the other person might be thinking.

If only I knew then what I know now – just tell her you stutter. It’s OK! In fact, you’ll be even cooler if you tell her with a joke about it!

Looking back on that incident had always been a source of regret but after drawing it as a comic for this story, I can now forgive myself. After all, I was only a kid trying to figure things out. And besides, look how far I’ve come.

I also decided to have fun with this memory and write an alternate ending where Franky Banky discloses his stuttering with a smile and a sense of humour (which you can read below).

If only the stuttering population around the world didn’t have to do all this work in the first place. The world needs stuttering awareness.

Daniele is the founder of the Stuttering is Cool podcast, book and comics. Go to www.stutteringiscool.com to find out more.

By Natasha Foster. "There are losses and gains connected to having a stammer, and I tried to reflect that in my poem."