Memories of Brian Dodsworth, our longstanding President and supporter who has passed away, aged 87. Details of Brian's funeral on 19th May are at the bottom of this page.

It is with great sadness to announce the news that our President, Brian Dodsworth, who has been involved with our charity for over 30 years, died on 10th April 2021.

Let's hear, in Brian's own words, how he first came to be involved with the Association for Stammerers (AFS), as it was then called:

"It all began with one of those small personal adverts in The Times: 'Association for Stammerers AGM to be held in Blackfriars Church Hall on June 14th 1986'. There I met Graham Parkhouse, who was on steward duty. We chatted and I agreed to go along to a meeting in the office at Farringdon. Graham's wife Nina was the lynchpin of AFS and she really did all the work — with her typewriter! In next to no time, I had agreed to become Treasurer and so became involved in the Association's development.

I am very proud to have been associated with AFS/BSA for all those years and expect it will go on to even greater achievements.

'We decided to have our own office and came to Blackfriars Road. That lasted a few years until Ron Turrell and I interviewed and employed our first Director, Peter Cartwright. From then onwards there was a great surge in activity and we needed larger premises. Peter found St. Margaret's House and, thanks to his professional expertise, the AFS graduated to the British Stammering Association (BSA) and became the highly professional organisation that it is today.

'David Preece and I became Joint Chairmen and, later, I took it on by myself, a position I occupied for 8 ½ years. I am very proud to have been associated with AFS/BSA for all those years and expect it will go on to even greater achievements." (Taken from the Winter 2008 edition of our old magazine Speaking Out)

Many of our supporters and previous staff members have taken to Facebook to share their memories of Brian.

Former Chair and Trustee Rachel Everard, in a comment, mentioned how instrumental Brian was in her involvement with the charity: "My earliest memory of meeting Brian was at an AGM back in the late 1980s — I remember his warm welcome and it was largely thanks to him I became an active BSA member. He was always encouraging, respectful and supportive. He was my rock and I frequently went to him for advice. He was a pleasure to work with — unfailingly kind and generous, astute and perceptive and a lot of fun. He always put others first and did everything he could to support children and adults who stammer and their friends and families. Brian did a huge amount for the BSA and one of his proudest moments was meeting Prince Charles (see the picture above)."

He was a pleasure to work with — unfailingly kind and generous, astute and perceptive and a lot of fun.

Rachel also gives us a glimpse of what Brian was like outside of work: "To me personally, Brian was both a mentor and dear friend. By getting to know him more, I became aware that he had many varied interests including travelling, film-making and music. He and his partner Frances travelled the world together and Brian made some wonderful films of his adventures abroad, which he showed me with his normal modesty. Because of these skills, I asked if he would help me make a short film about people living with different types of communication disability. He gave up many, many hours to do this and the resulting film became key to training delivered at City Lit, to help organisations become aware of what they could do to support people with communication difficulties."

Norbert Lieckfeldt, Chief Executive from 2002 until 2018, posted this touching comment: "(Brian was) kind but tenacious, self-effacing and quite shy in many ways, a total gentleman and absolutely dedicated to the charity. When he put his shoulder to the wheel to pull BSA out of the mire, he was one of my rocks and unfailingly supportive. Brian was absolutely central to the success of BSA over many, many years."

Norbert speaks of a turbulent and acrimonious period in the late 90s. Brian was no longer Chair and BSA's very future was in doubt. "Brian, despite everything," Norbert says, "agreed to come back as Acting Chair and helped to pull us back from the brink. I'll never forget that. He'd do anything for BSA."

Brian was absolutely central to the success of BSA over many, many years.

Cherry Hughes, Education Officer from 1997 until 2018 remembers that time too: "It was the measure of the man that Brian stood by the BSA at this unimaginably difficult time. His commitment and example made me feel that with him as Chair and Norbert as Director we would get through and flourish. Brian was the foundation stone of the new BSA that emerged from that period. We have a lost a true gentleman and a great friend of people who stammer."

Brian was there throughout that transition and became President, a role he proudly held until he passed. He saw us through another major change in 2018, when Norbert moved on to pastures new and Jane Powell became CEO. Brian contacted the office, keen to meet Norbert's successor and find out what all this new stuff with STAMMA was about. Jane recalled, "It was great to get a sense of the organisation's history. It made me determined to set it down on the new website before we lost it all. As CEO, and founder of another charity, I'm keenly aware of the responsibility and importance of understanding the organisation's history and the struggles that have gone before. Brian wasn't too keen on the name STAMMA itself, but he was absolutely behind the rebrand and refresh of the campaign and the organisation. He reminisced on the change from AFS to the BSA! I was delighted that Brian could make the STAMMA photoshoot and was confident in the new direction we were taking."

Current Chair Tim Fell said, "I was so sorry to hear of the passing of Brian. He was always extremely kind and charming when our paths crossed, which was usually at AGMs, conferences and open days. His interest in the charity never waned and he was always keen to know how things were progressing. He will long be remembered as one of our greatest supporters."

His interest in the charity never waned and he was always keen to know how things were progressing. He will long be remembered as one of our greatest supporters.

Our Web Editor Steven writes, "I myself met Brian a handful of times. The last was when he kindly agreed to take part in the photoshoot for our new website, early in 2019. Although we were going to be presenting the site and the charity in a radically different way, we were keen to involve Brian so that we could retain a sense of continuity, as well as pay tribute to his dedication to the charity. He jumped at the chance.

'On the morning of the shoot, Brian arrived and as we were waiting for the photographer to set up, I remember him looking around the newly decorated office, wide eyed and full of questions about our plans for the new site. He was chatting with the younger members who were taking part too and seemed thrilled to connect with a new generation involved with the charity — it was a generation gap that suddenly vanished as they sat and shared their experiences of stammering.

'I wasn't present at Brian's photoshoot, instead staying behind to host the others as they waited for their turn. But I remember my colleague Kate telling me upon their return that while they were out taking pictures, a man off the street interrupted the shoot and approached Brian. Kate was initially alarmed, frightened that the man might've meant harm. But instead he beamed, offered his hand and enthusiastically shook Brian's, saying how much of a pleasure it was to meet him. Kate said the man had mistaken Brian for a celebrity or a politician. It's easy to see why — Brian was effortlessly distinguished, with a refined air of authority about him; every inch the quintessential English gent. That moment was captured in the picture above.

'We got some really special pictures of Brian that day, particularly the ones taken in the café next door, with Brian cradling Trustee Betony Kelly's baby on his knee."

Our thoughts go out to Brian's family at this difficult time and we thank him for his dedicated service to our charity and to people who stammer.

We'll leave the last words to Norbert, again from his comment on Facebook: "There are many adults and children to whom we could offer life-changing support over the years and they will owe it in large measure to Brian's work, though they will never know his name. What a legacy to leave behind." 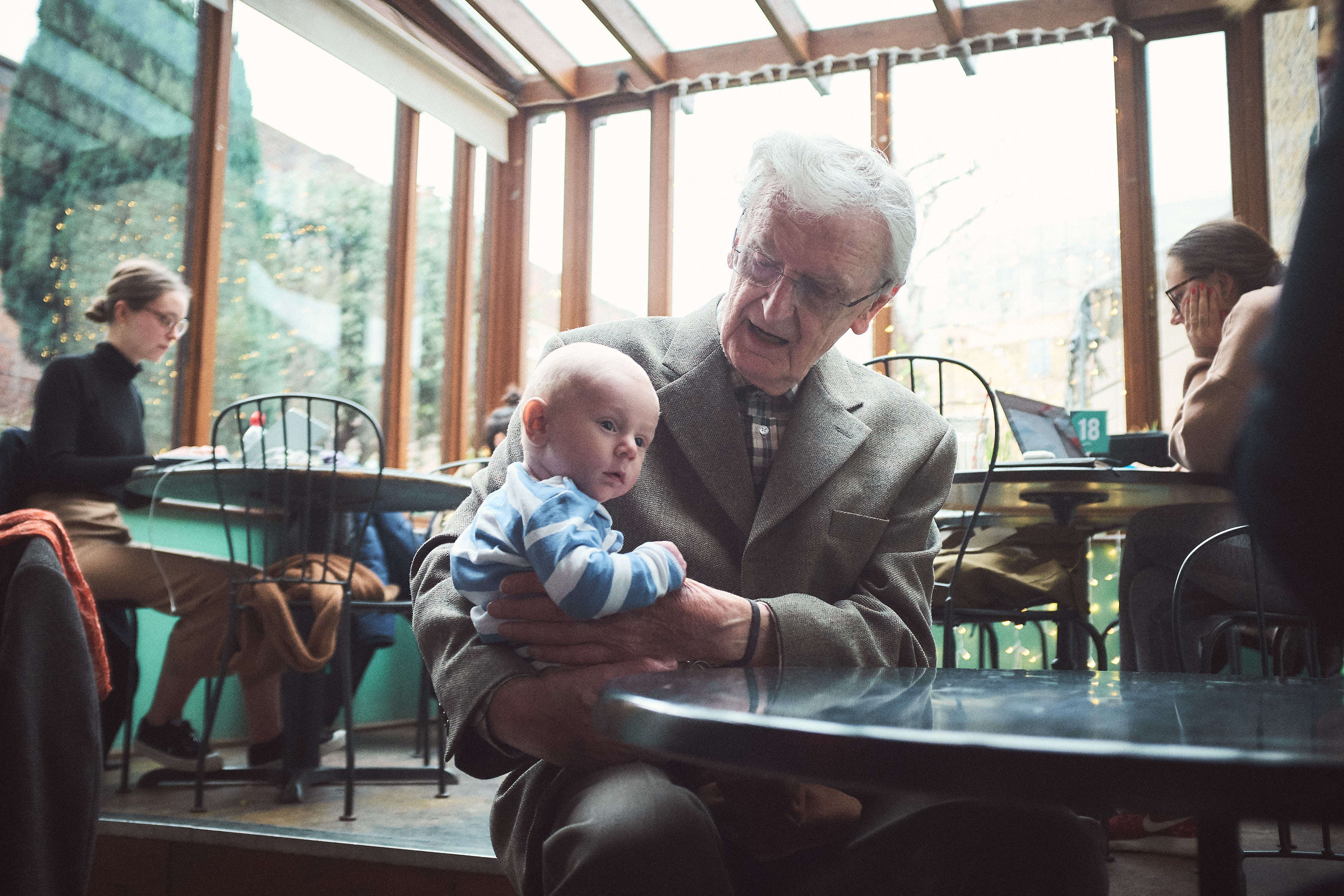 We have a rich history, stretching back over 40 years.

Becoming a medical doctor seemed an unrealistic dream to Sophia. Here she tells us about deciding to go for it and stop hiding her stammer, and how her speech gives her an advantage with patients.

Abid Hussain dreaded the morning register at school. Nowadays it's him who takes it. Read about he grew in confidence to become a teacher himself.

James writes about the benefits of telling people he stammers. He just wishes he started doing it sooner.