What a blast. International Stammering Awareness Day this year was arguably the best yet. From podcasts and ad campaigns, to awareness-raising stalls and black tie dinner events, see what everybody got up to.

We worked with our Patron Scroobius Pip on a special edition of his podast 'Distraction Pieces' and it was a doozie. It featured a chat with BSA supporters George, Natalie and Owen. It's a must-listen if you haven't already heard it. Stream and download it here. 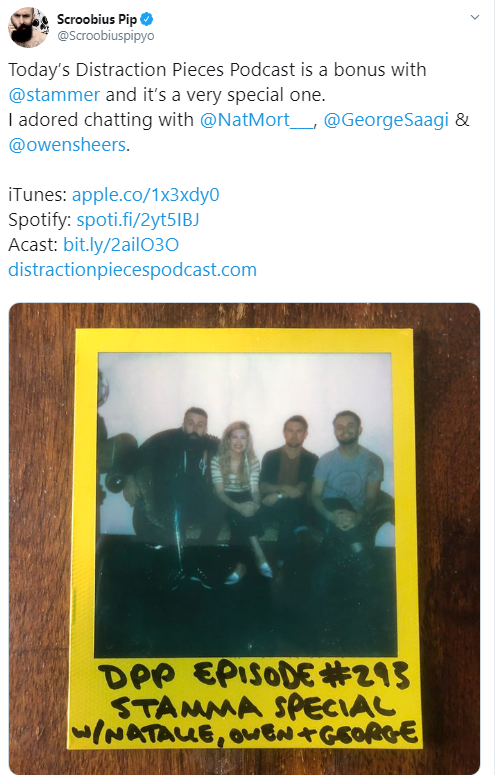 Here's some of the love it got on Twitter from some of Pip's 2.7k+ followers. 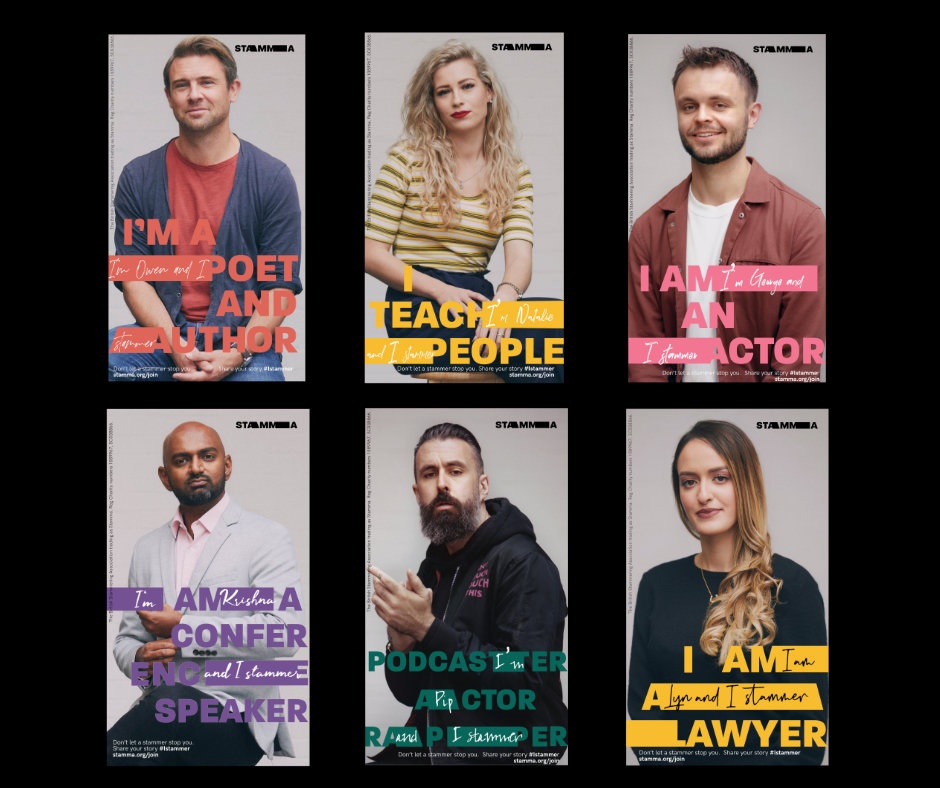 Pip, George, Natalie and Owen were also the stars of our poster campaign along with Krishna and Lyn, and their posters went up in several places across the UK.

Here's Natalie standing by her ad in Leicester. 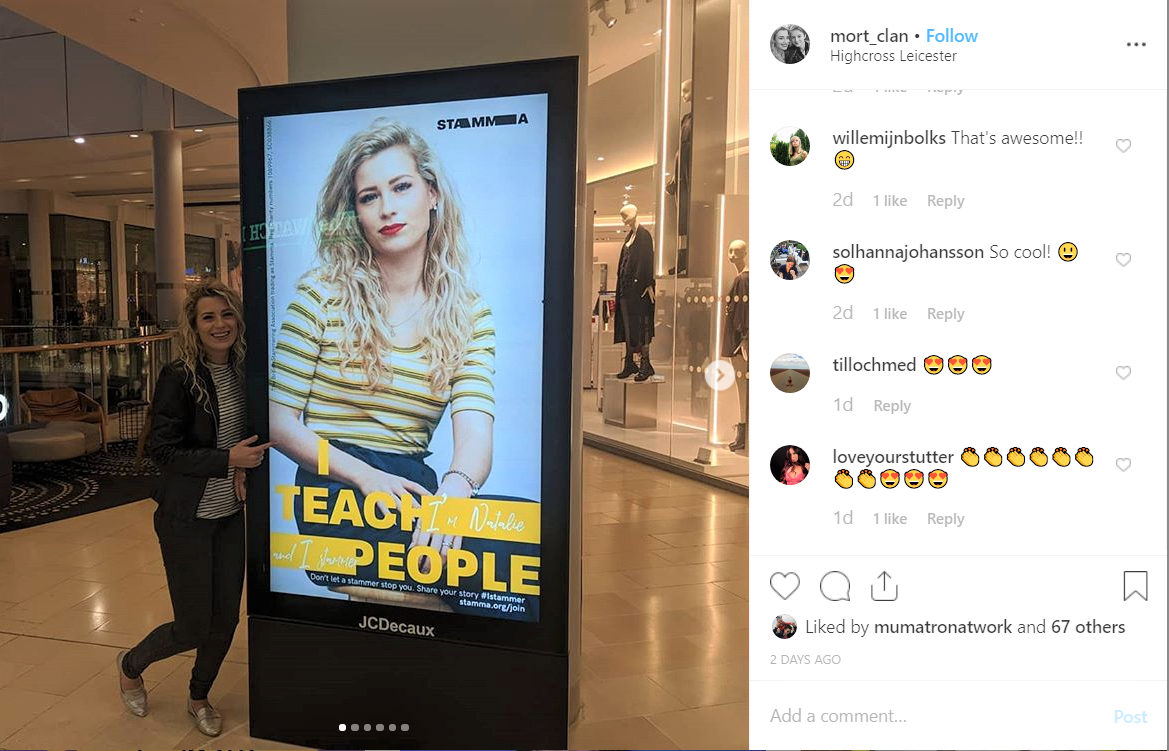 A speech and language therapy team in Birmingham spotted this one of Lyn. 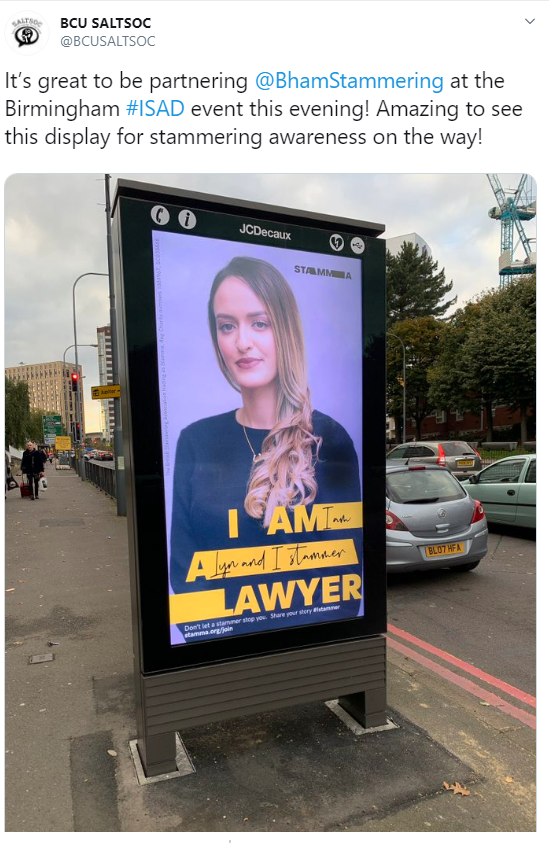 These were seen in a prime location near St. Paul's Cathedral in London. 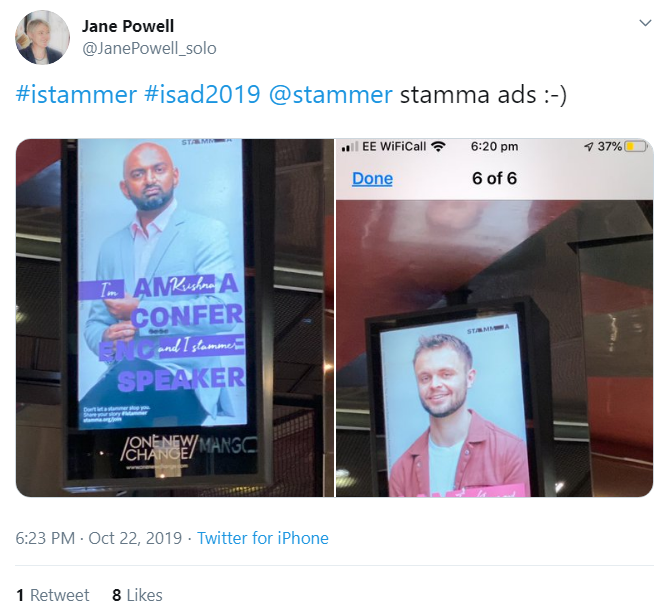 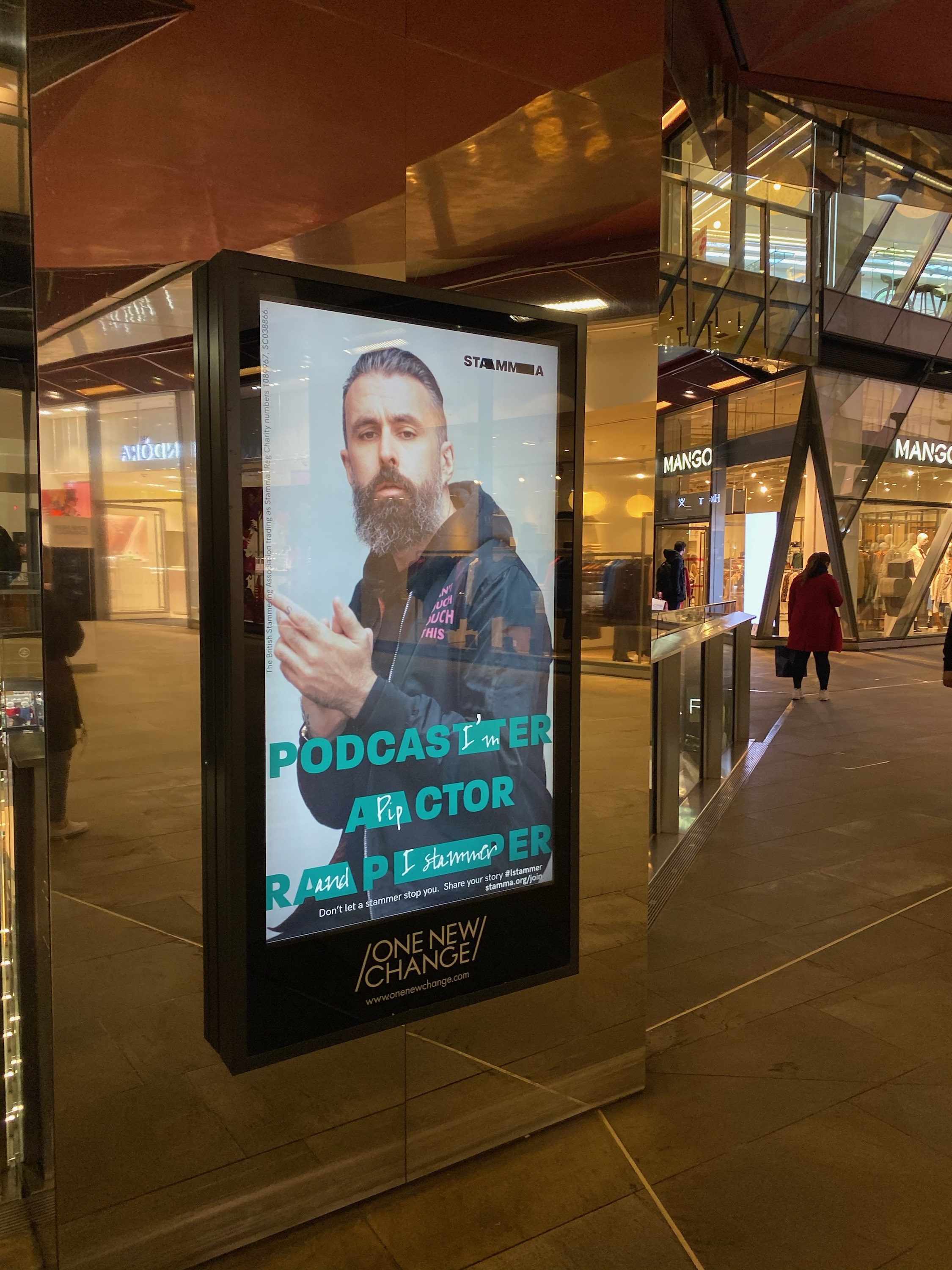 Many speech and language therapy teams organised information and awareness-raising stalls across the country. Here's just a few of them.

The Birmingham Stammering Network put on a special event at Birmingham City University with a selection of inspirational speakers. 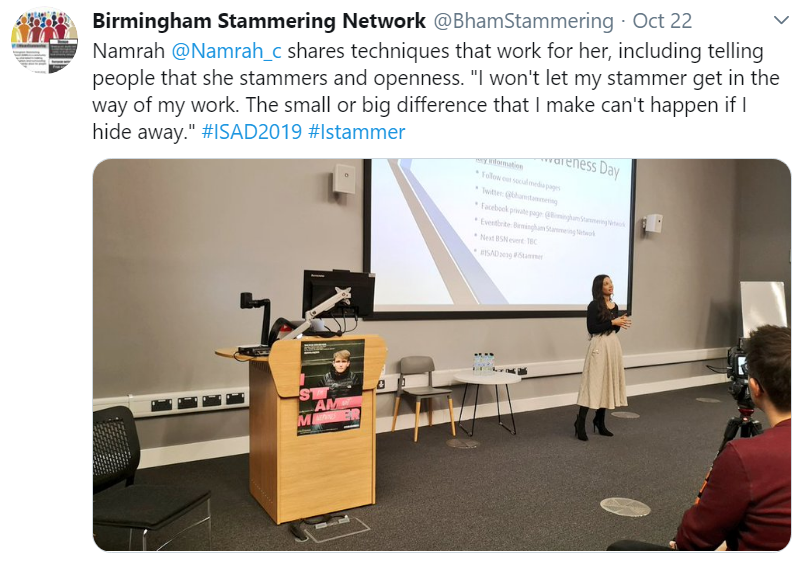 BSA's Rachel Everard did a talk with the Defence Stammering Network at an army base in Colchester. 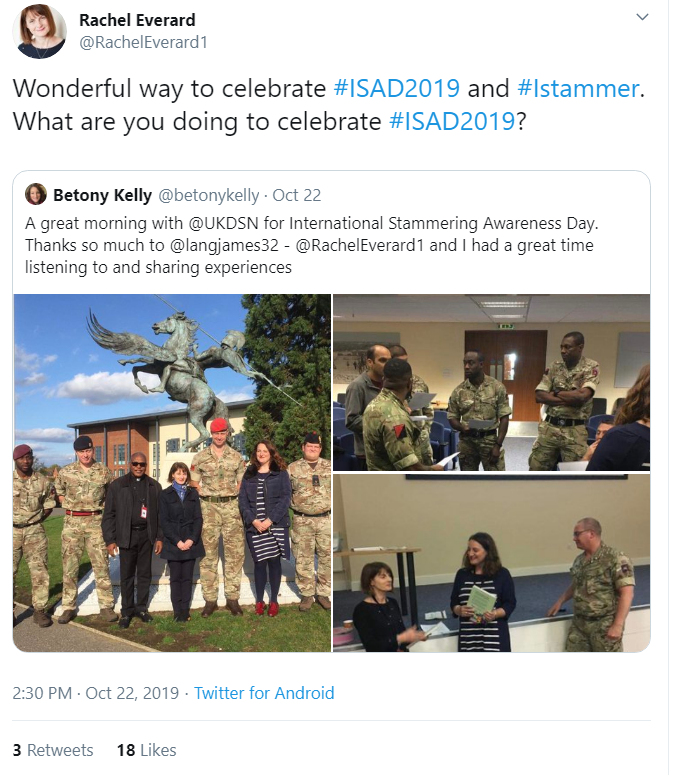 There was a great turnout at the 'Thriving with a stammer' event at UCL in London in conjunction with Giving Voice (below), with speakers covering topics including thinking positively about stammering, issues for women who stammer, and how colleagues at work can help. The event was live-streamed on our Facebook page and you can watch the whole thing here. 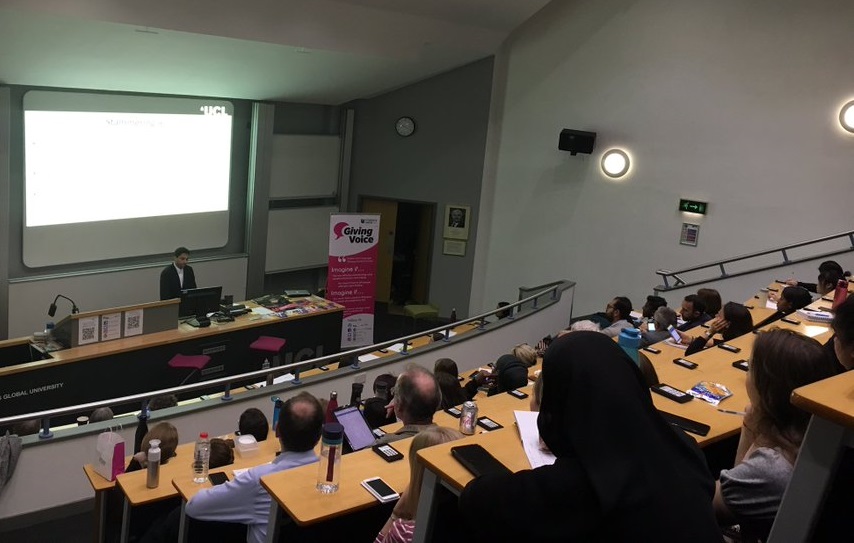 In Edinburgh, the Defence Stammering Network put on a special black tie dinner event celebrating ISAD and the 80th anniversary of King George VI's speech to the nation once World War II was declared (below). It featured an after-dinner speech by Wet Wet Wet guitarist Graeme Duffy.

A huge thanks to Gregor Hayes, who used Facebook to raise £120 for the BSA (see below). Gregor plays rugby for his county and wanted to share his achievements to encourage others. Thanks Gregor! 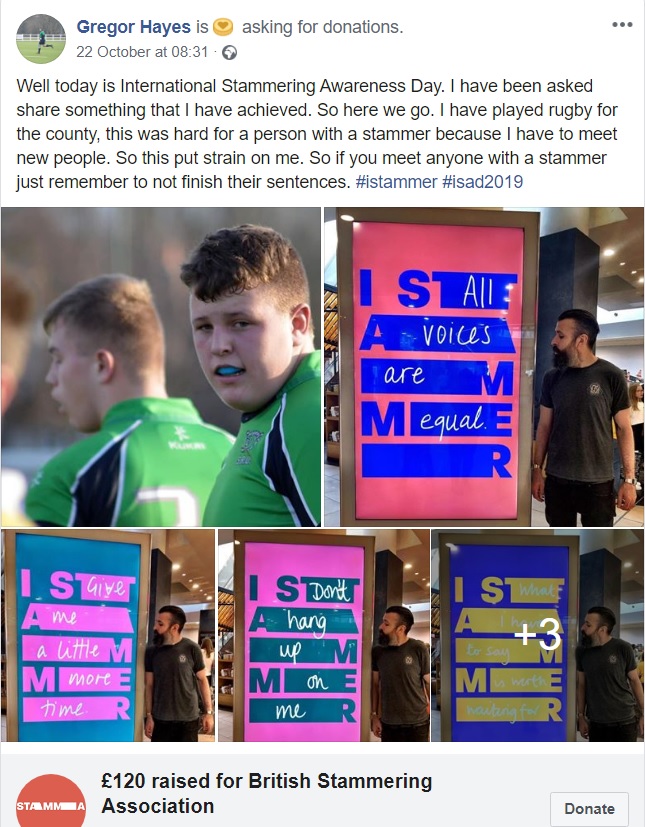 Lastly, a huge thanks to our supporters for buying our Stamma merchandise and raising awareness. 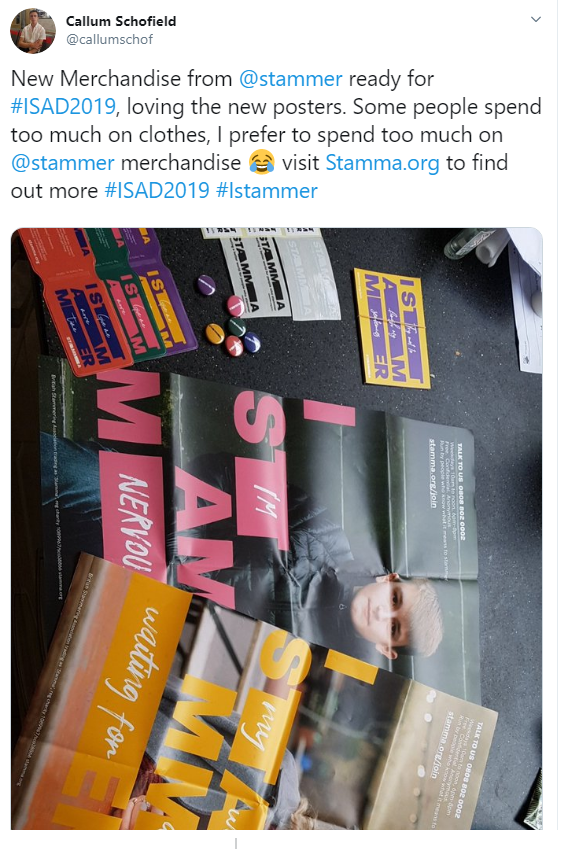 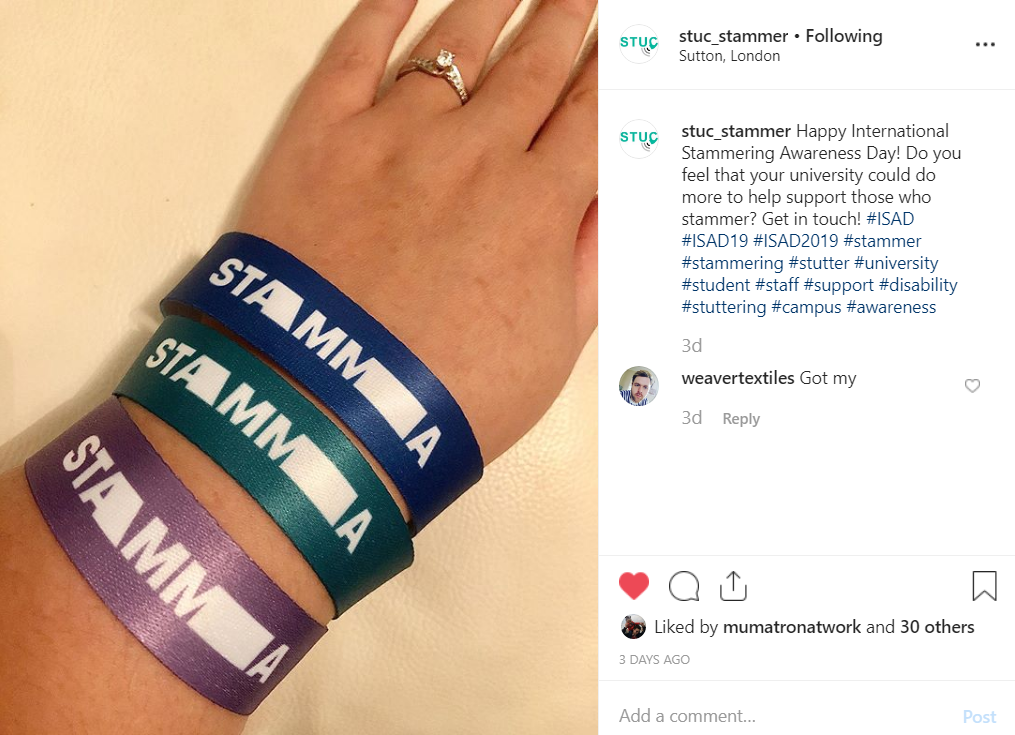 You can carry on the stammering-awareness raising all year round - we've got posters, wristbands, travel pass holders, stickers, badges and postcards in our shop.

Dean Ridge offers a message for young people who stammer worried about their future.

The Prince's Trust Young Ambassador of the Year Gideon Buabeng talks about the shame he was made to feel growing up, finding strength and how a near fatal attack led to him becoming a youth mentor.