No Diversity Without Disfluency

Our International Stammering Awareness Day (ISAD) 2021 campaign, pushing for greater representation of stammering in the media.

For ISAD 2021, on the 22nd October, we focused on a change.org petition calling for the broadcast media to include people who stammer, with the slogan 'No Diversity Without Disfluency'. We want to normalise stammering so that non-stammerers respond appropriately and that people who stammer see themselves reflected on TV and elsewhere in the media.

The expectation that people shouldn't stammer is profoundly damaging. Diversity must include disfluency. It is time to end the zero visibility of stammering. Until we hear and see people who stammer in the media, society will continue to respond inappropriately when they hear stammering.

Another brilliantly powerful campaign from @stammer for International Stammering Awareness Day. #stammeringawareness needs to happen all year round, across all platforms, especially mainstream media, where it is significantly underrepresented!

How did it go?

Pretty good. ITV gave solid coverage of the campaign on the 22nd, nationally and locally. Ofcom, the UK regulatory broadcasting authority, gave the whole campaign a ringing endorsement with a quote for ITV saying, "We applaud the work to raise awareness of stammering and encourage broadcasters to take notice".

The petition has now been signed by over 18,000 and stands at #8 on the most popular petitions on change.org. Do help us and share the link. We aren't done yet. We are going to promote this petition — here and globally — throughout the next year so that every broadcaster hears the
message.

We partnered up with Pearl & Dean, the UK's best-known cinema advertising contractor, to get our short film seen in cinemas! It's showing as part of the advertisements in selected theatres across the UK until October 2022. Read more in our article 'STAMMA advert on a screen near you' and see which cinemas we're showing in. 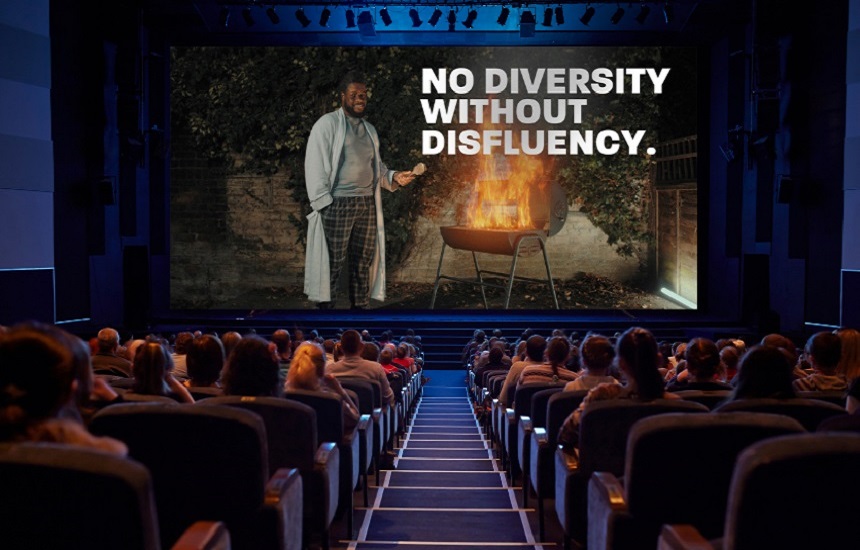 Here are some of the videos we produced to illustrate the lack of voices from people stammer on our broadcast media and to push the petition. These were filmed working with STAMMA's amazing team of volunteers, and the campaign developed with the staff team plus Nina G, Marc Winski and Ronan Miller.

"Absolutely brilliant!! I LOVE it. Watching this made my cry!! Good tears! (the Introductory Video) Brilliant ... thank you STAMMA for another heartening ISAD campaign. Edel"

"This is brilliant what you doing here with these little videos. I love it. What a community. I'm actually beginning to feel a SPARK of PRIDE flickering for having a stammer. From Disgust to Pride - what a journey and all down to you @stammauk helping me see others like me. ❤"

Daniel Liakh, creative brainchild behind our previous campaigns, stepped forward with the idea of a professionally produced video to push the petition, 'Not Just One Day', with support from the agency VMLY&R and Acid News (watch it at the top of the page). This beautifully shot, dark and funny video, featuring a voiceover from STAMMA member Paul Roberts, has won accolades around the world, and continues to gain traction on LinkedIn.

The BBC had their own story brewing around ISAD, which was the announcement that megastar Ed Sheeran would be reading a story on CBeebies. We were also delighted the BBC Stammering Network, held a webinar in the runup to ISAD featuring a live interview with Gautam Rangarajan, the BBC's Director of Strategy & Performance.

Meanwhile, ITV focused on the petition and featured the story with a lunchtime news item featuring Scroobius Pip and our very own Kirsten Howells, and a further item on the 6pm news, followed by a local news story on the issue in every ITV area, with interviews with STAMMA.

This campaign is open all year round, not just for ISAD, so:

Over the next year we'll track how the media will include disfluent voices in their programming and what efforts they take to ensure that stammering is accounted for in all their recruitment and HR policies.

2. Contribute to our Fighting Fund to support our campaigns and services.

3. Copy us. We encourage individuals and organisations around the world to copy this campaign and conduct live interviews with people about when they last heard someone who stammers on TV, and share these videos and petition, or create your own. This helps not just build awareness of stammering as an issue, but it establishes the need and right for people who stammer to be seen and heard on broadcast media.

The campaign received support from Ofcom, who said, "We applaud the work to raise awareness of stammering and encourage broadcasters to take notice".

The campaign was aimed at broadcast media, and two major broadcasters — the BBC and Channel 4 — acknowledged and platformed the discussion, not about whether we should hear stammering voices, but about why we should, and Ofcom's comment sealed an in-principle victory that this should happen.

We aren't asking for quotas, but over the next year we want to see evidence that stammering sits within the diversity agendas of our broadcasters. So that dropdown lists around differences include stammering; so that broadcasters have the processes in place to ensure that people who stammer aren't put off from applying for jobs; and that they feel they can disclose a stammer and get the support they want in order to do their best. We've not arrived at our destination, but it is solid progress.

Support our campaigns and help us make a real difference for people who stammer.

Things you can do on social media this International Stammering Awareness Day.