The origins of Stammering Pride and Prejudice

A new book, 'Stammering Pride & Prejudice', sets out to challenge the view that stammering isn't something to be ashamed of, but rather celebrated. Ahead of its launch next Friday (27th September), marked by a special event at the City Lit, co-editor Patrick Campbell tells us the story behind it.

I was asked to write about Stammering Pride and Prejudice to help publicise the book I recently co-edited with Sam Simpson and Christopher Constantino. Although we’ve been working on the book for three years, I’m unable to do it justice when describing it. So instead I thought I’d explain how it came to be and what it represents. To do that I’ll tell you a little of my own journey with stammering. 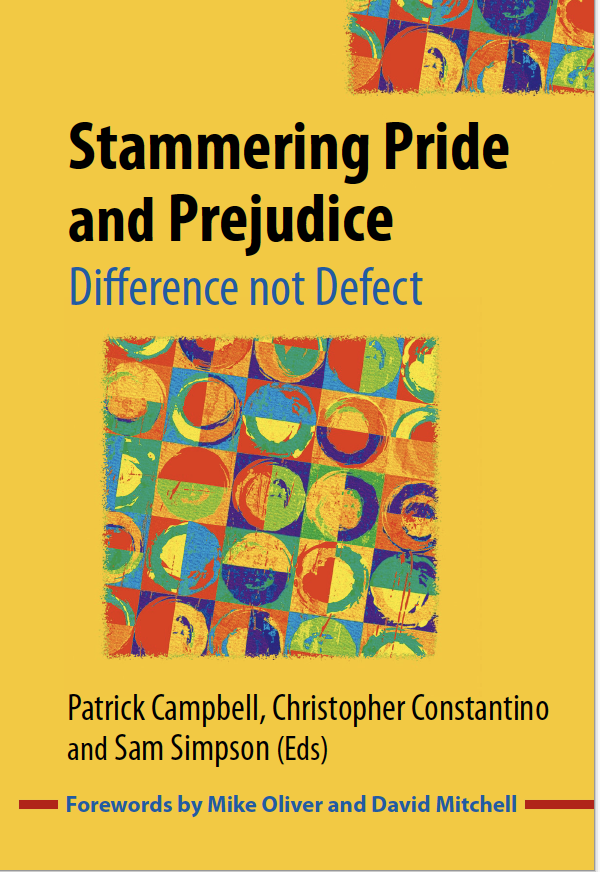 Quite a few years ago, my speech therapist challenged my own choice of language around stammering. Prompting this was my reason for wanting to go on a City Lit therapy course: “I want to sort out my stammer,” I said. It seemed a logical choice of words to me. I’d been trying to sort out my stammer quite unsuccessfully for some time, going to great lengths to not stammer and appear fluent.

I punctuated this with attempts at therapy to ‘fix’ my stammer: I tried costal breathing, twice, and a delayed auditory feedback device. Neither worked consistently and I returned to the old strategies: word-swapping, avoiding situations and sometimes silence.

My then therapist threw the words back at me. "'Sort out'. That’s an interesting choice of phrase, Patrick, why did you choose it?" I’d like to say I had an epiphany in that moment, that my whole world rotated and I replied, “I now realise my desire for fluency reflects the pervasive stigma and discrimination towards stammering in our society, which has ultimately come to reside in me as self-stigma and oppression of my own stammering.” That wasn’t my reply but the question did start a shift in my thinking.

I went to City Lit that summer and had some great therapy that helped me understand myself and my stammer. I came out feeling a bit more open about it.

Consequently, I went to the 2013 Glasgow BSA conference in a better place. I hadn’t ‘sorted out’ my stammer (still haven’t) but I was getting somewhere. It was there I first heard about the social model of disability applied to stammering in a talk by Sam Simpson and Katy Bailey. I was interested —  understanding stammering as a human rights and accessibility issue rather than a ‘pathology’ appealed to me. It opened up new avenues of seeing my speech that weren’t negative. It made stammering political. Therapy had been useful, but its relatively narrow focus on stammering as an issue to come to terms with didn’t sit with me as the wholly right response. I reflected on it, exploring my own emerging, but still tentative, thoughts and feelings in a blog post called ‘What if we fight for our right to stammer?’.

We needed something that shared and gave weight to these new, positive narratives and understandings of stammering.

Events took on a life of their own from there. I looked around and noticed a burgeoning collective of people seeing stammering in a different way: The DidIStutter.org collective was challenging society’s preconceptions of stammering as a negative; the Employers Stammering Network (ESN) were advocating for more inclusive workplaces; and Erin Schick, and my friends Nisar Bostan and Rory Sheridan, were exploring stammering from an artistic perspective.

I went to a stammering conference in Rome to learn more. It was a culture shock from conferences I’d been to in the past. For a start, there weren’t many people who stammered present at all. The focus was on how professionals could facilitate fluency for children and help adults better psychologically and socially adjust to the world. The new ways of understanding stammering as a disability rights issue that I had found so empowering weren’t talked about. Honestly, I came back angry.

My high returned when I later attended an event celebrating the ESN at the House of Commons. In one transcendent moment, the audience, gathered in this most important of buildings, remained in raptured attention as a speaker had a long and dramatic block, with Big Ben chiming the hour in the background. Those courageous, insightful and positive stammered voices were there again.

I met Sam again there too and told her how much I enjoyed ‘Stammering therapy from the inside’, a refreshing book she co-edited. A little off-hand, I mentioned how I thought we needed another book that shared, and gave weight to, these new, positive narratives and understandings of stammering we were beginning to have as a community; presented in an accessible and empowering way to people who stammer – rather than an academic text.

Sam – like my excellent therapist before her – threw the words back at me: “We do. Why don’t we write it?”. With all the literary experience of three blog posts and a couple of academic papers, I agreed.

The next morning, Sam emailed the publishers J&R Press. They were interested – lift off. We asked Chris, a contact of Sam’s whose writing and thoughts chimed with ours, if he wanted to co-edit it. He agreed; the transatlantic triumvirate was formed. We then reached out to all the people whose writing, thinking, activism and art we loved, for contributions. They came back in droves. Three years later, we have this book. I cannot quite put it into words but it’s filled with everything I love in the world of stammering and I hope you love it too.

The book 'Stammering Pride & Prejudice: Difference not Defect', co-edited by Patrick Campbell, Christopher Constantino and Sam Simpson, is out now, and you can order it here. There is a special day long book launch event at the City Lit in London on Friday 27th September and you're invited. Find out more and book your tickets here.

A new book challenges the stereotype that stammering is inherently negative.

Catalogue of books you can borrow. Includes self-help and fiction for all ages, biographies, for parents, for Speech & Language Therapists and teachers.

Rebecca examines the issue of 'stammering pride' in this honest and open article.