This June, people from all over the globe gathered in Iceland for a week of talks and workshops (and sightseeing) at the World Congress for People who Stutter 2019. Jane Powell, who spoke at the event, shares her diary.

After pulling together my presentation on the train from Portsmouth, I arrived at Gatwick to see some of our long-term members who were off to the Congress too. A short flight to Reykjavik airport later, I met some other familiar faces and we all took the journey over to Hveragerdi, where the event organised by Malbjorg, the Icelandic Stuttering Association, was taking place. The theme this year was 'Embrace your stutter'.

At the opening ceremony, delegates were treated to music and a warm welcome from Icelandic Prime Minister Guðni Th. Jóhannesson and Arni Thor Birgisson, from the European League of Stuttering Associations. Free drinks thereafter were provided, and I met Hanan Hurwitz (who serves on the advisory board of the International Stuttering Association) and Daniele Ross, creator of the 'Stuttering is Cool' podcast and comic.

Today I attended the ‘50 Million Voices’ presentation by Iain Wilkie, co-founder of the (Employers Stammering Network), which brought me to thinking about what our goal back in the UK around stammering and work should be: what will change look like if we create a better workplace for people who stammer? There are some great examples of different kinds of approaches out there, such as supporting people with practice interviews; telling the stories of different journeys; working with key employers, etc. So what should we aim for in the UK? Changes in policy, a test court case, targeting key employers or developing more networks perhaps?

I finished just in time to gate-crash 'The Voice – My Body as an Instrument', by Birna Bragadottir as she and her group headed off collectively to practise harmonies in the shower. Birna is one of those women who lights up the room and radiates warmth wherever she goes.


Next I attended ‘Stamily’. At the BSA conference in Cardiff last year, the group of young people who had attended that year’s Erasmus Youth Exchange for People who Stutter in Italy brought a sense of energy and fizz to our event. I wanted to hear more, and here they introduced us to stamily.org, a place to share stories and create awareness, which was great. What wasn’t so great was discovering that because of Brexit, applying for places to future Youth Exchanges is no longer an option. This, I think, is devastating news; from my perspective the difference the exchange programme made was life-changing.
The Keynote speech by Anita Blom was, as indicated in the programme, a smorgasbord of insights around stammering, her own experiences and journey as someone who stammers – and some of the questions that have arisen out of this journey. Swirling around in the questions she raised were issues around discrimination, and the 'medical vs social model' around stammering.

My own presentation, 'Stamma.org Campaign', took place in the main room where the opening ceremony took place. It hadn’t yet been loaded, so there was a swift changeover of laptops. It was well attended, with around maybe 60-70 delegates who were interested in how we brought creative and advertising agencies on board with Stamma, and how we’ll measure the campaign’s impact and respond to some of the inevitable negativity and push back. Overall I like to think the campaign was well received, and people liked the bold visual inclusivity of the campaign.

Next I headed to the session ‘Stammering Pride & Prejudice’ by Patrick Campbell, Sam Simpson and Chris Constantino. I’ve suggested Patrick write an article for the website around the social model, which I think would be helpful to give perspective. Sam and Patrick outlined the social model and talked about the different views their new book touches upon, and the drive towards making stronger links around neurodiversity.

What struck me, listening to the presentation, was that most charities are based around the ‘medical model’, and the overarching message of the Stamma campaign is social - simply that we’re here and that public responses to stammering can be deeply unhelpful. The BSA's call to the public through Stamma isn’t to help raise funds for therapy, but for society to take stammering seriously. Just as importantly, our website doesn’t assume that this is a binary discussion; we signpost to therapies and ways of finding help. We want society to accept and make room for different abilities.

I worry that much of our activity within the stammering world is inward-facing. It’s great that there are programmes and activities to support people who stammer, lots of focus on research and on support for children – but we need to tackle public perceptions. I’d like to hear some strategic visions. 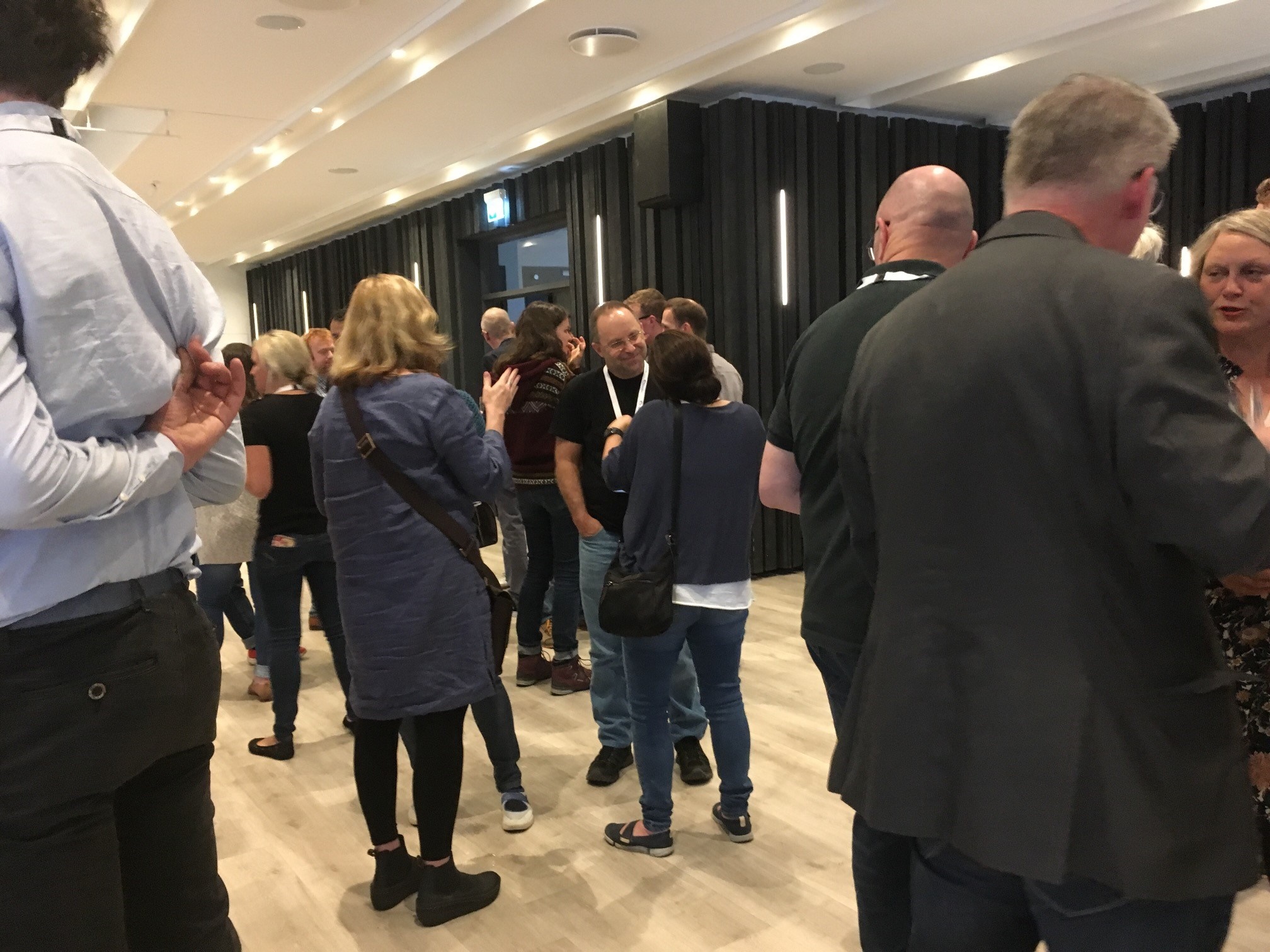 I should have attended the ‘Supporting Children who Stutter’ workshop – BSA Trustee Mandy Taylor bounced out of it buzzing with enthusiasm. There’s a new clinical survey looking at the experiences of parents – can we support/share this in the UK?

The day finished with trips outside – hiking, football, and visits to the local tomato factory and caves. I realised I hadn’t signed up to any, so I tagged along on the hike and we toured the very pretty village and looked at the hot springs.

Today all the delegates headed off for a day trip, so time for me to catch up on BSA work in the hotel room.

I had a bit of a quandary about which to attend: 'What the Stuttering Community Can Learn from the Mental Health Community' (Michael Sugerman), or 'How is Stuttering Presented in Movies?'. I set off to Michael's first, and then, with his permission, set off to watch the movies. It was interesting. For the most part yes, stammering, or stuttering, has been used a device to show a killer, or someone who is a 'slow learner', or it's used for comedic effect. Then onto the 70s and 80s. I thought about the different strands of culture. 'One Flew Over the Cuckoo’s Nest' was way before ‘A Fish Called Wanda’ but far more sensitive to the portrayal of stammering and mental illness. It was a film which I believe impacted the lives of all that saw it. Our culture is made up of different strands, with time frames which don’t match and portrayals and understandings which advance and regress.

In the day's keynote  'Stuttering – One Disorder or Many?', Johanna Einarsdottir talked about how the coding of stammering’ has developed, with anxiety and avoidance added to the criteria, and looked at the different ideas of how many are impacted by a stammer (between 8.4-12% of children), and at recovery (between 58%-71%, depending on who you ask). In conclusion, she posited that the recovery rate was based on the definition of recovery(!) and the majority of children who recovered started before the age of 4 and stammered for less than 18 months. Treatment during pre-school years seems to work, but not for every child. Regained fluency in children who don’t get therapy is also high.

She then talked about recent research using a ‘time out’ treatment. This garnered some disquiet from the audience. Concerns were raised about syllable-counting as a measure and about literally stopping a child from speaking when they stammered. Yet she claimed much success.

Next for me was 'Changing Children’s Attitudes to Stammering', a presentation looking at the fact that pre-schoolers will not understand why some of their contemporaries stammer and do not know how to respond to stammering. We were shown a short film for children and the InterACT programme, helping children understand differences. The importance of recognising negative responses in pre-schoolers was noted. Altogether, it felt like a blunt approach though.

Hanan Hurwitz presented 'Raising Awareness About Stuttering in Israel - Practical Experience'. They’ve got carefully planned targets and activities, with great strides into talking with teachers and lecturers, and in working with a recruitment agency to help people into work.

This meant, unfortunately, I missed 'Group Therapy Meetings'. Again, Mandy emerged from that one humming with energy and enthusiasm.

Last session of the day was 'My Beautiful Stutter'. This I found very hard to watch, and confess I left half way through. I’ll watch the rest later. It seemed a compelling piece of film-making. Michael Sugarman’s film also traced the same ground. Bringing children and young people together, to learn from each other and sit in an environment where everyone stammers, is hugely powerful.

The Gala Dinner, which I was persuaded to attend, was held at a ‘Viking’ Lodge a short drive away from the hotel. A log building, covered with grass and earth, it looked lovely, internally. The noise was intense, more so after the band started. One of the sessions in the week touched on the fact that people who stammer find it hard to focus when there’s lots of background noise!

Most had prepared and dressed in their finest. Others not so much. The food was great, the dancing energetic, and every now and then I nipped outside to enjoy the silence, the herd of horses snickering away in the distance, and the fine spray of rain. Then off back to the hotel.

I split the morning session, attending ‘Coming Home to Ourselves’ with Heather Najman first. The trauma of stammering has come through many of the workshops at the conference, and it was gripping listening to Heather outline just how physical trauma is. Which made total sense.

Then over to Hilda Sonsterud’s workshop, 'Minding the Body in speech: a Multi-Faceted, Holistic Approach to Stuttering Therapy'. This felt like a dogma-free approach to therapy, focused upon the individual and what they wanted to achieve. She and her team measured everything, took everyone, and the results looked great. I’d like to hear more when they finally publish.

Comedian Nina G’s Keynote was fab. It was very funny and spot on, and she spoke about her own experiences, the fears that hold us back, and the necessity to seek change.

At our conference last year, the young people who had attended the Italian Youth Exchange programme were noticeable because of the confidence and energy they brought to the weekend. I was keen to hear more, so I attended the ‘Speaking Circles’ session with Satu Nygren and Anita Blom, which gave me some insight into the supportive way in which the members of the group had been able to progress. Following that thread I attended the workshop looking at the ‘Manual For Youth Workers and Teachers About How to Help Young People who Stutter’. I’ve brought the questions back, but I suspect that much of the learnings lie in the support we saw in the films (Say and My Beautiful Stutter) that we saw earlier.

Then it was goodbye time and dates for the diary.  4-6th September 2020 in Stockholm;  22-25th July 2021 in Montreal for the IFA/ISA/ICA World Congress; and the International Stuttering Association World Congress 2022 in Tel Aviv, Israel. Sod that, let's get everyone to Birmingham next year for our conference. Then Arni and the team came to the stage for flowers, thanks and applause. 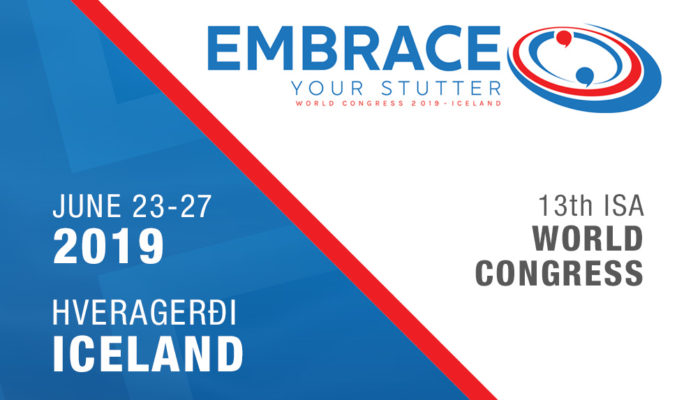