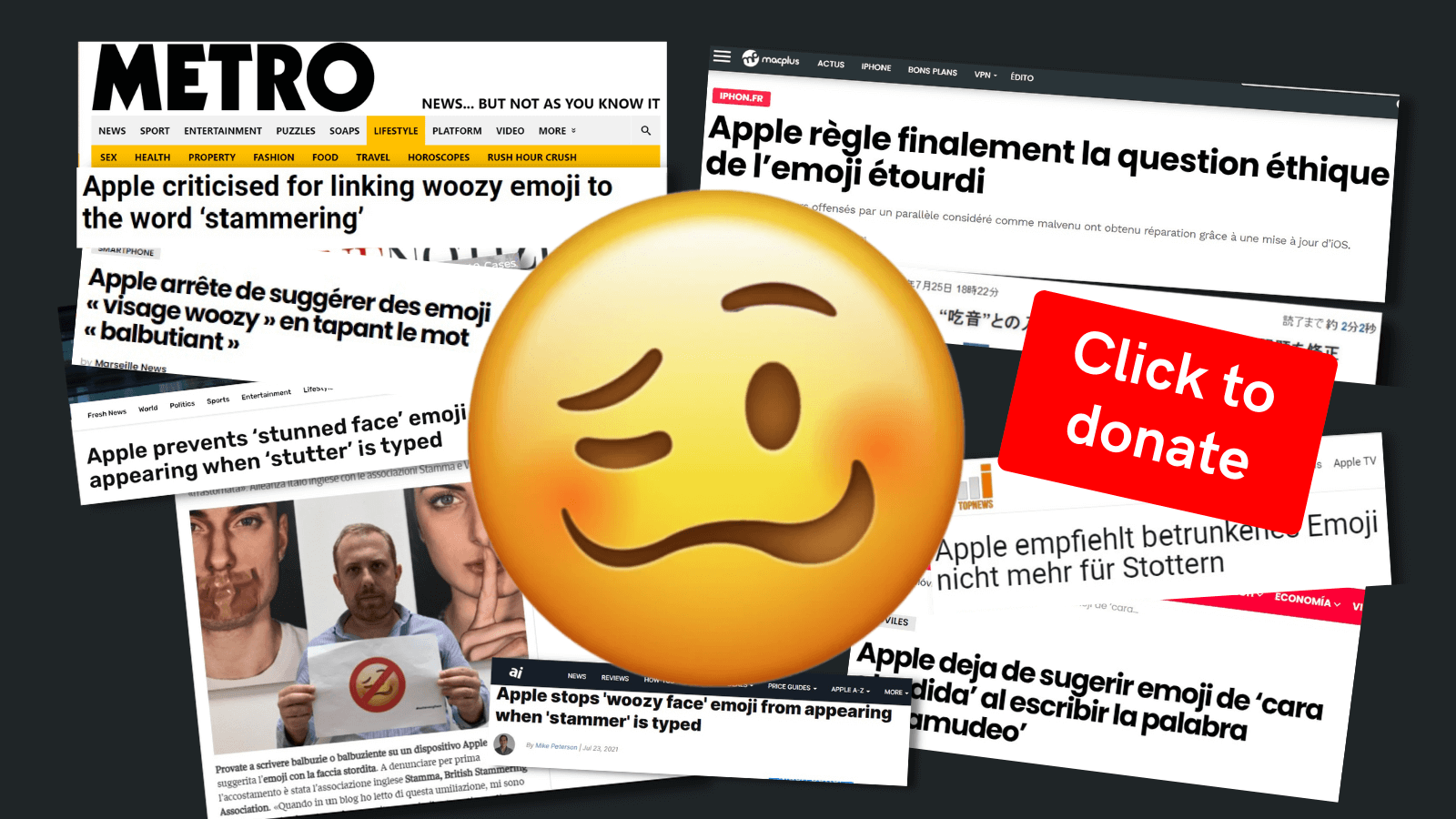 2021 campaign to stop Apple auto-suggesting the woozy face emoji whenever the word 'stammering' was typed.

Early in June 2021, one of our STAMMA helpline volunteers said that when she typed in the word 'stammering' to her Apple device, the 'woozy face' emoji was suggested.

The woozy face emoji, which has a wavy mouth and a closed eye, was added to Apple's roster in 2018 and is supposed to depict being drunk, dazed, infatuated, or tired and emotional. We decided to investigate and found that this came up on other peoples' devices too.

"This comes up on my phone when I type stammering! This is ableist, as sometimes people who stammer make facial expressions when experiencing a block, and this almost mimics that. I hope Apple realise this and apologise." (Ellie)

"What would disabled people think if a wheelchair emoji popped up every time?!" (Sue)

One of our patrons, the author David Mitchell, said on Twitter. "Pls cld someone at @Apple tell me if this is calculated mockery, a stab at puerile humour or the act of a disgruntled ex-employee? I'm honestly curious."

Our research indicated that the problem lay solely with Apple — not any other platform, not with the creators of the emoji, not with the Unicode Consortium. Just Apple.

We then wrote to Apple, asking for a response to our complaint. We pointed out that stammering can be seen as a disability under the Equalities Act 2010, as for many people it can severely impair day-to-day functions and for adults is lifelong. As such, this linkage between stammering and the woozy face emoji, showing as it does someone drunk, confused or in love, could constitute harassment under the Equalities Act.

We issued a press release, telling the world what our members had told us, that this linkage was offensive. In it, STAMMA CEO Jane Powell stated: "This is demeaning and damaging. Stammering is how some people talk. Treating it as a joke is stigmatising. It can leave people embarrassed about how they sound, bullied and ashamed which can affect their mental health, careers and relationships."

It was picked up by the Metro newspaper as well as platforms covered Apple around the world, in multiple languages. Typing in 'STAMMA' and 'woozy face' into Google brought up pages and pages of news articles.

We were contacted by supporters around the world, some who knew people at Apple and businesses which worked in partnership with Apple, vowing to chase this up. Meanwhile we reached out to our international community, and working with the International Stuttering Association and VivaVoce Assoziatione in Italy, we started plotting a coordinated campaign, with a petition on change.org/NotWoozyFace along with a social media campaign, and reached out to international colleagues around the world.

We checked out 'stammering' in 15 different languages and discovered that the Woozy Face appeared in each. We sought legal advice, held late night and crack of dawn meetings and were totally ready to take on Apple, globally.

At 4:30pm on 22nd July 2021, we received word that Apple had released iOS update 14.7, which stopped the woozy face emoji from appearing when typing the word stammering. No apology, no acknowledgement from Apple that they had fed the stigma associated with stammering. Nothing.

The news was picked up around the world, with headlines reporting on the change made by Apple. 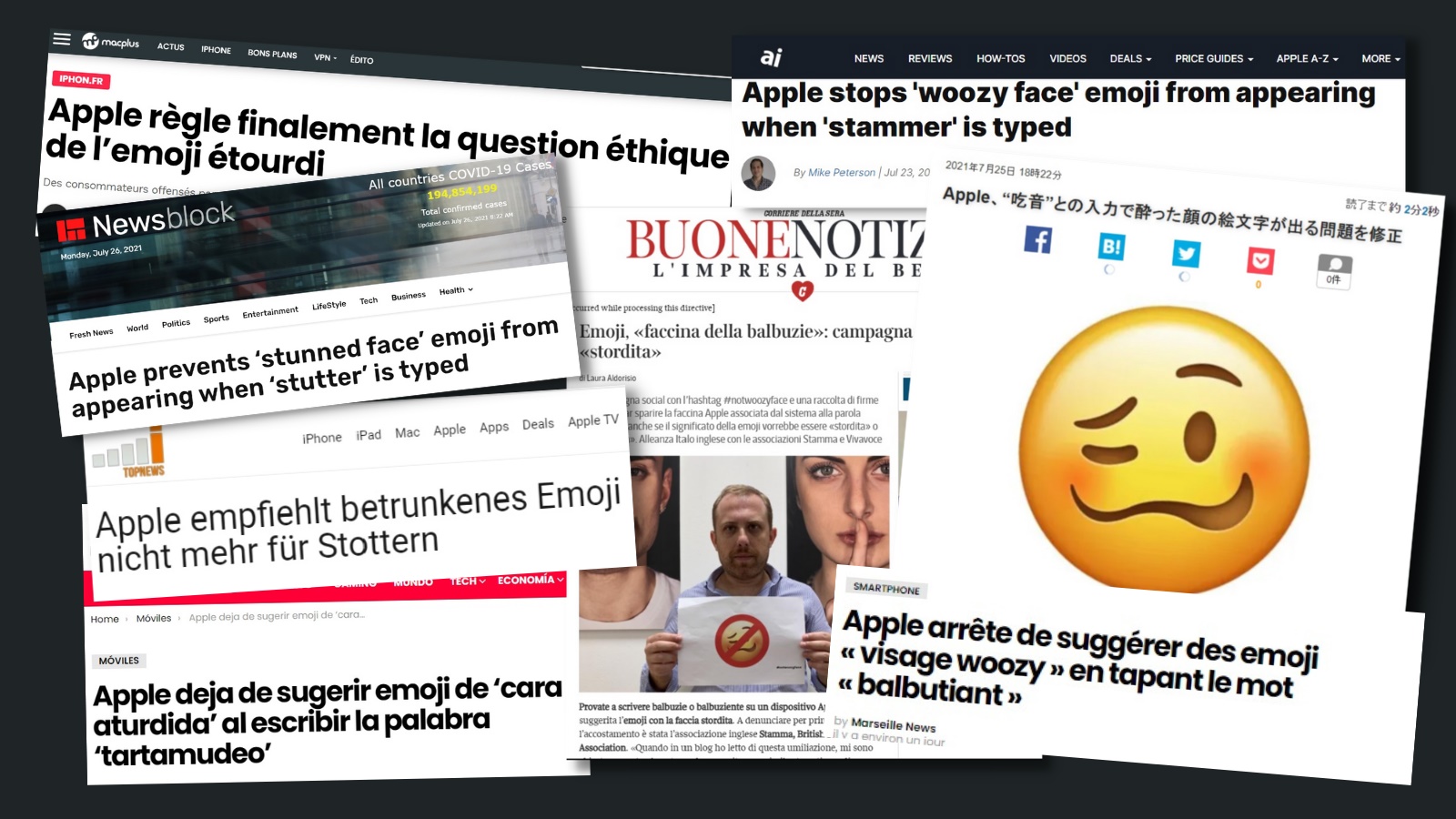 In its Diversity and Equality statement, Apple says: "Across Apple, we've strengthened our long-standing commitment to making our company more inclusive and the world more just. Where every great idea can be heard. And everybody belongs."

Regardless of whether Apple intended to demean people who stammer, they did. Their lack of an apology and their failure to even respond to our complaint, shows they have a long road ahead to make good on that commitment to the stammering community across the globe.