I was on First Dates!

First dates can be hard enough for people who stammer. Imagine being filmed for a television programme whilst on one! This didn’t seem to faze Paul Thompson, who took part in the Channel 4 show.

My name is Paul, I’m from Weymouth and I recently took part in a TV show called ‘First Dates’. If you didn’t see it, it’s a reality dating show with a difference. It doesn’t focus on choosing a date; it’s about the date itself. Participants know nothing about the date they have been set up with other than what they look like, from an emailed photograph.

I found out about it via a link on the BSA Facebook page, saying that Channel 4 were looking for people who stammer to audition. I’ve always wanted to be on telly and decided it would be fun so I applied. Ten minutes later I had a phone call from one of the producers, Joe, who gave me a brief phone interview (daunting I know, but Joe was very nice and made me relaxed as he knew I stammered). He asked me about myself, what kind of girls I like and how my stammer affects me. He seemed really interested, and a few days later I got the call to go to London to audition.

I was worried that I was going to come across as a bumbling, crying idiot and people were going to laugh at me.

The audition was basically an extended filmed version of the phone interview, with a bit more emphasis on my stammer. It was very relaxed and Joe was eager to get me on the show, and a week later I had confirmation that they wanted me. It was at this point I started getting nervous and excited all at the same time; I suddenly realised that I was going to be stammering in front of millions of viewers all over the UK! Scary. I was worried about my voice and how it would come across. I hate listening to my own voice so I could only imagine what others would think. But I knew it would be a good thing to do as it would put me outside my comfort zone and also hopefully raise awareness of stammering. I wanted more people to see how the condition affects us and how best to talk to somebody who stammers.

I went up to London to record the interview that would be broadcast, which repeated a lot of stuff I had said at the audition. They also asked what I was expecting from the date. They only showed a tiny bit of what was actually recorded, though.

The dates themselves took place in a posh London restaurant. A bit smarter than what I’m used to; it was no Wetherspoon’s beer and a burger night! Being filmed for the show was weird. There were cameras everywhere; on the walls, the ceiling, by the bar, in the toilets and outside. Everything you did was captured, there was no escape! But after a while I kind of forgot they were there.

The first date was with a writer called Christine. I was really, really nervous beforehand. Not because of the usual first date nerves (well, a bit) but because I wasn’t feeling well and I know that this makes my stammer worse. I had been stammering quite badly all morning, and I was worried I was going to come across like an idiot. It also stopped me saying a lot of things as I knew I was going to stammer so I really held back my conversation at times.

We had a fun time, though, and agreed to be friends, with a high-five sealing the deal.

The way the date was edited made Christine come across badly. She got a lot of abuse online afterwards with people calling her condescending, but she wasn’t really like that at all. They can’t show the whole date, so they pick the bits that keep viewers interested. Unfortunately this was me having a bad stammer day and Christine looking like she was being rude and patronising. 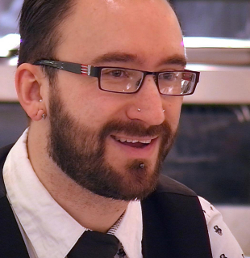 Anyway, I thought she was really interesting. She did talk a lot but I didn’t mind as I was enjoying not talking so much, if I’m honest. She did talk over me a few times and tried to finish my sentences, and I did try to explain it wasn’t helping. I had a bit of an emotional five minutes in the post-interview, though, where they filmed me talking about how it went. I had a little cry because I was annoyed that my stammer was bad and I wanted the date to have gone better. We had a fun time, though, and agreed to be friends, with a high-five sealing the deal.

For a few days after filming, I was quite upset with myself over the way it had gone. I was worried that I was going to come across as a bumbling, crying idiot and people were going to laugh at me. I thought my stammer was atrocious and I nearly called to ask them to remove the emotional bit. However, producers kept phoning and emailing me to check I was alright, which was lovely. They assured me that it would be edited in such a way that the viewers would warm to me and that it would all be alright.

I also featured in the next episode, where my second date was a down-to-earth, funny Irish lass, Kathryn. She was great. We got on famously, laughing and joking about all sorts of stuff. I was more relaxed with Kathryn but that probably had a lot to do with the fact that I wasn’t feeling ill this time. I even managed to get my BSA wristband into the conversation as well. Well, she noticed it and asked what it was. The stammer didn’t seem to bother her at all; she even said she liked it and that it was more like an accent than anything. “An accent that takes half an hour to say a word,” I believe was my reply. Unfortunately the date was to go no further either; Kathryn only wanted to be friends. I think the geographical distance between us was a big decider in that. Looking back, neither date was really my type anyway.

I was so nervous before the first episode aired that I hardly watched myself at all. However, all my worries soon disappeared as the public reaction came flooding in. I couldn’t believe it. The amount of new Twitter followers, Facebook friend requests, messages and tweets was unbelievable! My phone was going crazy. Nobody had a bad word to say about me. I was completely overwhelmed with positive responses. It took me till 2am that night to sift through all the online correspondence.

My phone was going crazy. Nobody had a bad word to say about me. I was completely overwhelmed with positive responses.

All my friends tuned in and left me lovely comments. I had random ladies from all over the country saying how they would love to date me and how brave I was for going on the show. It was mental. I even had a marriage proposal! (Not sure how serious that was, though). I get noticed and chatted to all the time when I’m out. Most people just want to say “well done” and talk to someone who’s been on the telly, but it’s still nice. A lot of the response has been from fellow people who stammer, saying it has given them confidence to do more challenging things, which is great. I’m glad I could be a kind of role model.

Overall, I had a great time on the show. It was a wonderful experience and I met some awesome people in the cast and crew. I would definitely do it, or something similar, again.

This article was taken from our old magazine 'Speaking Out' ,Spring 2014.

Fiona Jack doesn't stammer but was set up on a blind date with someone who does. Here she gives a different perspective - see how the date went.

Chris Douce shares some tips for anyone looking for love online.