“When I was younger a simple phone call crushed me for months. It was with a family member who wasn’t expecting me to call and my stutter was REALLY bad at the start of the call. They didn’t realise it was me and I couldn’t get my words out to explain so I just had to pass the phone over. For a good few months my confidence was crushed and for years after that I would avoid making phone calls. Even to this day, they’re always my last choice.” Scroobius Pip, actor, rapper, podcaster & BSA Patron

Prior to taking up post as the CEO at the British Stammering Association, I was discussing the opportunity with a friend, who made a joke about stammering. Hearing that joke transformed the job opportunity for me. I wanted this job more than anything. The need to change such attitudes seemed to me to be absolute, and what a brilliant opportunity to make a difference.

One year and one month on, we’re on the threshold of our first public campaign aimed at changing public attitudes.

I’d like to thank members for completing our online surveys, which we’ll use to brief the media and help them understand the issues facing those who stammer. The assumptions that you stammer because you’re nervous, unsure, drunk, have a learning disability or, appallingly, you stammer because you are lying. Frankly, it’s been hard reading through the surveys completed by young people who’ve given up chasing their dream careers  and feel thwarted in education, work and love.

The thrust of the Stamma campaign is to give the public an insight into what it means to stammer, dispel stereotypes and encourage people to take stammering seriously. The words and the Stamma logo visibly stammer and are hard to read. Within this text are messages from our members about what it means to stammer. The campaign is visually bold and upbeat. Our ads will be going out on bus stops and outdoor media spaces in the weeks ahead. 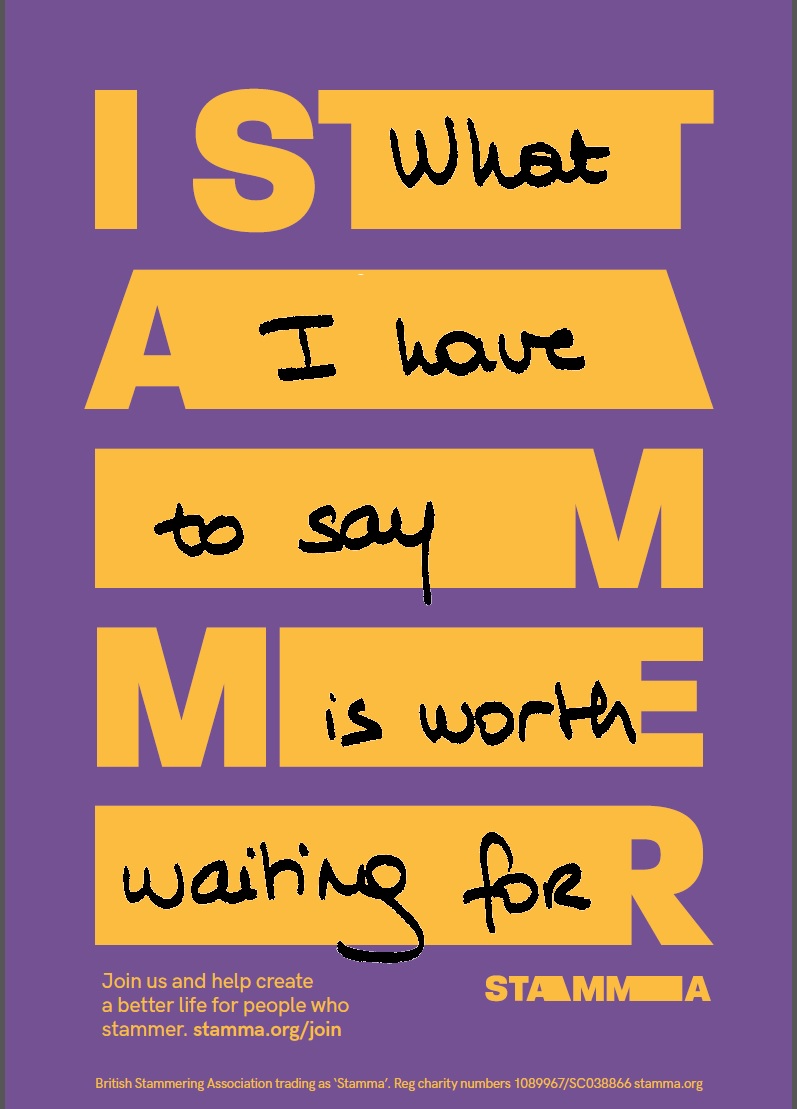 Alongside this campaign we want to generate discussion on social media using the hashtag #Stamma. We also want to build understanding and awareness. Join in using #Stamma to share your messages and let us know if you see an ad out in the “wild”. All posts using #Stamma will be pulled over to our stamma feed [https://stamma.org/connect/stamma-feed]

In the 1970s a blind man falling down a hole or walking into a wall was acceptable comedy.  After I took up the post here, I got a text from a former colleague saying “C-c-c-congratulations”. It’s time we put this one to bed, time to ensure that stammering is understood and treated as a serious issue.

Our Patrons have been happy to lend their voices:

“My stammer is very unpredictable and has caused me much anxiety over the years. I don't like the telephone, I dread live radio and sometimes I even dread asking for a railway ticket. Most of the time I am very fluent and am not bad at public speaking, but then, out of nowhere, a  sudden block - it's not funny when it happens.” Dame Margaret Drabble, writer & Patron

“When I was an MP my colleagues in Parliament and the media sometimes mistook my stammer for nerves or a lack of conviction. It was very frustrating but I learned that to be open about my stammer took the pressure off me and helped them understand. I hope this campaign will help many more people understand what a stammer is all about, so that more people who stammer are able to make the most of their talent and potential.”  Ed Balls, Patron

“I’m proud to support the BSA’s Stamma campaign to diminish this ignorance, and I look forward to a day when stammering carries no greater stigma than being left-handed.”  David Mitchell, writer

If you’re new to the British Stammering Association, then welcome. I hope you’ll join us in breaking the poisonous notions that surround stammering.

Michael Smith and Lucy Dyson, two of our Team Stamma runners at the Manchester 10k in May, tell us about their training regimes and how the day went.