Very sadly, one of our longest-standing members, Patricia (Pat) Clark, passed away on Sunday 5th January after a short battle with cancer. She was 85. Her Grandson Ross writes this touching tribute.

Pat was a longstanding member of the British Stammering Association (BSA), having joined the organisation in its infancy during the late 1970s. Over the course of her life she held a number of administrative positions at the charity, her favourite being the official librarian, and she regularly attended the AGMs.

The BSA was incredibly important to Pat and she was a keen supporter of its work, being especially concerned about education and furthering research. Above all else though, Pat placed huge value on the community and the friendships that membership afforded her.

Pat placed huge value on the community and the friendships that membership afforded her.

In her leisure time, Pat was a scholar of history and held a particular interest in the Tudor period. A woman of letters, Pat read literature at an impossible rate and wrote vociferously; countless letters to friends and family, but also poetry. She had a stunning ability to recite verse from memory.

In 1952 she met Stan Clark (1916-2005), who was the love of her life, and they married a year later. She had two children (Helen & Nigel), six grandchildren (Graham, Adam, Ross, Robbie, Morley and Lewis) and was Great Nana of Stanley.

Stammering didn’t define who she was. 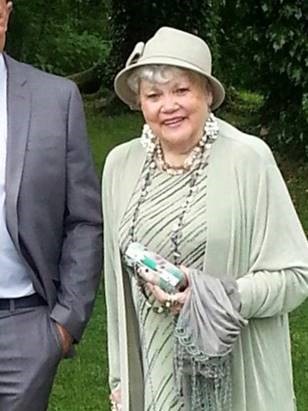 While writing this piece, I was asked how Pat coped with her stammer. The truth is I’m not too sure how to answer this. When you grow up with someone that has a stammer, it kind of falls away into the background – at least, that’s my experience of being with Pat. To put it another way, it didn’t define who she was. To me, Pat was a wit and an intellect and that’s how I’ll remember her. On reflection, however, I’m sure it must have been a challenge, but to what extent I could only speculate.

As a sweet anecdote, I surprised Pat one year by coming to meet her at the Manchester conference in 2016 (fortuitously I happened to be in town and was free for a few hours). We sat down for tea and to my great surprise people knew who I was – they were friends of Pat’s and as they popped over to say hello, they all said, "This must be your grandson, Ross?" I was moved; people knew my name because they all talked to each other not just about the struggles and challenges they faced, but about each other, their lives, their families and friends, the state of politics, etc. I think this meant a lot to Pat.

Pat was a unique character. She was loved and will be missed.

Main picture: Pat with her grandchildren.

Want help with your stammer? Has your child started stammering? Looking to support a friend, relative or colleague? We're here.

Speech and Language Therapist Jenny Packer explains what parents can expect when taking their child for a speech and language therapy assessment.